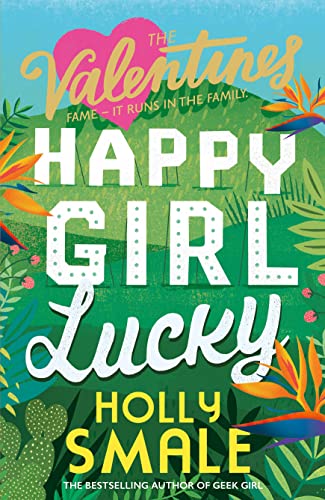 Fame - it runs in the family!

The Valentine sisters - Hope, Faith and Mercy - have everything: fame, success, money and beauty. But what Hope wants most of all is love, and it doesn't matter how far she has to go to find it.

Except real life isn't like the movies. Unless of course you're a Valentine . . .

"Harriet's comical and cringeworthy misadventures in the world of fashion are guaranteed to get you laughing." The Week Junior

"You can't fail to like Harriet." Parents in Touch

"A feel-good satisfying gem that will have teens smiling from cover to cover, and walking a little taller after reading" Books for Keeps

"I would highly recommend Geek Girl to anyone who likes a good laugh and enjoys a one-of-a-kind story." Mia, Guardian Children's Books website

HOLLY SMALE wanted to write from the age of five when she discovered that books didn't grow on trees like apples. Her passion for stories led her on a number of adventures, including modelling, teaching children in Japan, PR and backpacking across dozens of countries around the world. She has a degree in English literature and an MA in Shakespeare and Feminism from Bristol University.

The Valentines series is the blockbusting follow-up to the number-one, internationally bestselling and acclaimed Geek Girl series, which sold over three million copies in thirty languages and won the Teen and Young Adult category of the Waterstones Children's Book Prize.

Happy Girl Lucky is the first in a brand-new series that follows the famous Valentine sisters.

GOR009766113
The Valentines: Happy Girl Lucky by Holly Smale
Holly Smale
Used - Very Good
Paperback
HarperCollins Publishers
2019-02-07
480
0008254141
9780008254148
N/A
Book picture is for illustrative purposes only, actual binding, cover or edition may vary.
This is a used book - there is no escaping the fact it has been read by someone else and it will show signs of wear and previous use. Overall we expect it to be in very good condition, but if you are not entirely satisfied please get in touch with us.