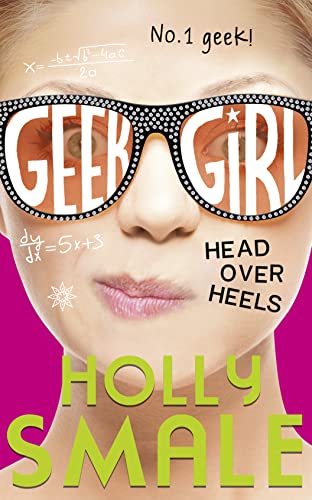 Head Over Heels
by Holly Smale

"My name is Harriet Manners, and I will always be a geek."

The fifth book in the bestselling, award-winning GEEK GIRL series.

"My name is Harriet Manners, and I will always be a geek."

The fifth book in the bestselling, award-winning GEEK GIRL series.

Harriet Manners knows almost every fact there is.

She knows duck-billed platypuses don't have stomachs.
She knows that fourteen squirrels were once detained as spies.
She knows that both chess and snakes and ladders were invented in the same country.

And for once, Harriet knows exactly how her life should go. She's got it ALL planned out. So her friends seem less than happy, Harriet is determined to Make Things Happen!
If only everyone else would stick to the script...

But is following the rules going to break hearts for GEEK GIRL?

GOR010401838
Head Over Heels (Geek Girl, Book 5) by Holly Smale
Holly Smale
Geek Girl
Used - Like New
Hardback
HarperCollins Publishers
2016-02-22
448
0007574622
9780007574629
N/A
Book picture is for illustrative purposes only, actual binding, cover or edition may vary.
The book has been read, but looks new. The book cover has no visible wear, and the dust jacket is included if applicable. No missing or damaged pages, no tears, possible very minimal creasing, no underlining or highlighting of text, and no writing in the margins.