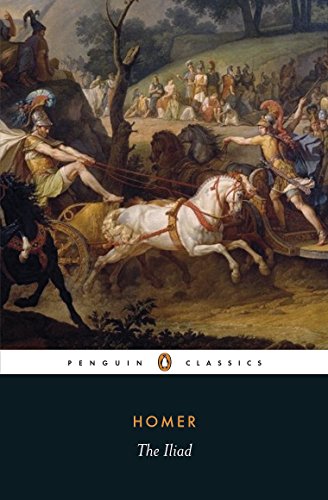 Used Price
$22.99
inc. GST
Free Shipping in Australia
A story that centres on the critical events in four days of the tenth and final year of the war between the Greeks and the Trojans. It describes how the quarrel of Agamemnon and Achilleus sets in motion a tragic sequence of events, which leads to Achilleus' killing of Hektor and determines the ultimate fate of Troy.
Reviews:
Trustpilot
Very Good Good Well Read

An ancient Greek epic which underpins the whole of western literature, Homer's The Iliad is a timeless evocation of the struggle to retain a sense of honour and virtue amidst the horrors of war. This Penguin Classics edition is translated with an introduction by Martin Hammond.

The Iliad is the greatest literary achievement of Greek civilization. The story centres on the critical events in four days of the tenth and final year of the war between the Greeks and the Trojans. It describes how the quarrel of Agamemnon and Achilleus sets in motion a tragic sequence of events, which leads to Achilleus' killing of Hektor and determines the ultimate fate of Troy. But Homer's theme is not simply war or heroism. With compassion and humanity he presents a universal and tragic view of the world, of human life lived under the shadow of suffering and death, set against a vast and largely unpitying divine background. The Iliad is the first of the world's great tragedies.

Martin Hammond's acclaimed translation is accompanied by a full introduction and a comprehensive index.

'Martin Hammond's modern prose version is the best and most accurate there has ever been'
Peter Levi, Independent

'A fine Iliad for our times'
Philip Howard, The Times

Much the best modern prose translation of the Iliad -- Robin Lane Fox * Financial Times *
This new prose translation of the Iliad is outstandingly good . . . to read it is to be gripped by it * Classical Review *
Superbly direct and eloquent . . . by its sensitivity, fluency, and flexibility, it will win a permanent place on the shelves of Homer-lovers -- Martin Fagg * Times Educational Supplement *
Martin Hammond's new version is the best and most accurate there has ever been, as smooth as cream but as clear as water . . . Hammond's Iliad deserves to become a standard book -- Peter Levi * Independent *
Surely the best Iliad in quite a few decades * Greece & Rome Journal *
Here is a fine Iliad for our times, to be read with great pleasure -- Philip Howard * The Times *

The Greeks attributed both the Iliad and the Odyssey to a single poet whom they named Homer. Nothing is known of his life, though the main ancient tradition made him a native of the island of Chios in east Aegean. His date too is uncertain: most modern scholars place the composition of the Iliad in the second half of the eighth century BC.
Martin Hammond has taught in England and in Greece. He has also translated the Odyssey. He is now Headmaster of Tonbridge School

GOR001188399
The Iliad by Homer
Homer
Used - Very Good
Paperback
Penguin Books Ltd
1987-08-27
528
0140444440
9780140444445
N/A
Book picture is for illustrative purposes only, actual binding, cover or edition may vary.
This is a used book - there is no escaping the fact it has been read by someone else and it will show signs of wear and previous use. Overall we expect it to be in very good condition, but if you are not entirely satisfied please get in touch with us.