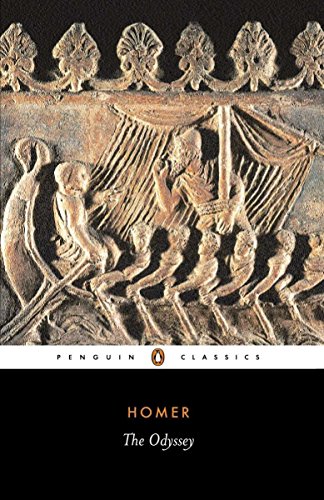 The Odyssey
by Homer

In Stock
$21.49
inc. GST
A tale of Odysseus and his ten-year journey home after the Trojan war forms one of the earliest and greatest works of Western literature. Confronted by natural and supernatural threats - from the witch Circe who turns his men into pigs, to the twin terrors of Scylla and Charybdis.
Like New Very Good Good Well Read
Only 1 left

The Odyssey by Homer

'The Odyssey is a poem of extraordinary pleasures: it is a salt-caked, storm-tossed, wine-dark treasury of tales, of many twists and turns, like life itself' Guardian

The epic tale of Odysseus and his ten-year journey home after the Trojan War forms one of the earliest and greatest works of Western literature. Confronted by natural and supernatural threats - ship-wrecks, battles, monsters and the implacable enmity of the sea-god Poseidon - Odysseus must use his bravery and cunning to reach his homeland and overcome the obstacles that, even there, await him. E. V. Rieu's translation of The Odyssey was the very first Penguin Classic to be published, and has itself achieved classic status.

"[Robert Fitzgerald's translation is] a masterpiece . . . An Odyssey worthy of the original." -The Nation

"[Fitzgerald's Odyssey and Iliad] open up once more the unique greatness of Homer's art at the level above the formula; yet at the same time they do not neglect the brilliant texture of Homeric verse at the level of the line and the phrase." -The Yale Review

"[In] Robert Fitzgerald's translation . . . there is no anxious straining after mighty effects, but rather a constant readiness for what the occasion demands, a kind of Odyssean adequacy to the task in hand, and this line-by-line vigilance builds up into a completely credible imagined world."
-from the Introduction by Seamus Heaney

Homer is thought to have lived c.750-700 BC in Ionia and is believed to be the author of the earliest works of Western Literature: The Odyssey and The Iliad. E V Rieu was a celebrated translator from Latin and Greek, and editor of Penguin Classics from 1944-64. His son, D C H Rieu, has revised his work. Peter Jones is former lecturer in Classics at Newcastle. He co-founded the 'Friends of Classics' society and is the editor of their journal and a columnist for The Spectator.

GOR007228401
The Odyssey by Homer
Homer
Used - Like New
Paperback
Penguin Books Ltd
2003-01-30
416
0140449116
9780140449112
N/A
Book picture is for illustrative purposes only, actual binding, cover or edition may vary.
This is a used book - there is no escaping the fact it has been read by someone else and it will show signs of wear and previous use. Overall we expect it to be in very good condition, but if you are not entirely satisfied please get in touch with us.