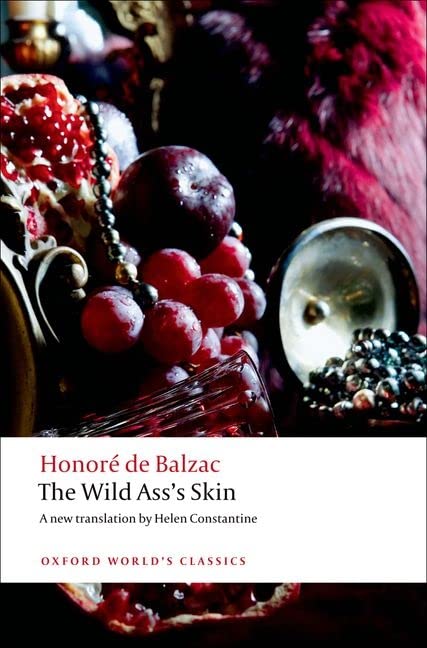 Out of Stock
$18.49
inc. GST
A young man, in despair over gambling debts, buys a magical animal skin that grants his every wish but hastens its owner's death in the process. Balzac's compelling tale is here presented in an exuberant new translation, with an illuminating introduction and notes.
Like New
Only 0 left

'Who possesses me will possess all things, But his life will belong to me...' Raphael de Valentin, a young aristocrat, has lost all his money in the gaming parlours of the Palais Royal in Paris, and contemplates ending his life by throwing himself into the Seine. He is distracted by the bizarre array of objects in a chaotic antique shop, among them a strange animal skin, a piece of shagreen with magical properties. It will grant its possessor his every wish, but each time a wish is bestowed the skin shrinks, hastening its owner's death. Around this fantastic premise Balzac weaves a compelling psychological portrait of his hero, a prisoner of his own Promethean imagination, and explores profound ideas about the human will, vice and virtue, love and death. Helen Constantine's new translation captures the energy and exuberance of Balzac's novel, one of the most engaging of his 'Etudes philosophiques' from the Comedie humaine. The accompanying introduction and notes offer fresh insights into this remarkable work. ABOUT THE SERIES: For over 100 years Oxford World's Classics has made available the widest range of literature from around the globe. Each affordable volume reflects Oxford's commitment to scholarship, providing the most accurate text plus a wealth of other valuable features, including expert introductions by leading authorities, helpful notes to clarify the text, up-to-date bibliographies for further study, and much more.

The novel has been elegantly translated by Helen Constantine, who is both faithful and creative * Nicholas White, Times Literary Supplement *
A model of its kind * Nineteenth-Century French Studies *

Helen Constantine taught languages in schools before becoming a full-time translator. She has published three volumes of translated stories for OUP, Paris Tales, French Tales, and Paris Metro Tales. She has translated Gautier's Mademoiselle de Maupin and Laclos' Dangerous Liaisons for Penguin, and with her husband David Constantine, edits the international magazine Modern Poetry in Translation. Patrick Coleman's books include editions of Rousseau's Confessions and Discourse on Inequality and Constant's Adolphe for Oxford World's Classics, and Anger, Gratitude, and the Enlightenment Writer (Oxford, 2011).

GOR007183906
The Wild Ass's Skin by Honore de Balzac
Honore de Balzac
Oxford World's Classics
Used - Like New
Paperback
Oxford University Press
2012-11-30
288
0199579504
9780199579501
N/A
Book picture is for illustrative purposes only, actual binding, cover or edition may vary.
The book has been read, but looks new. The book cover has no visible wear, and the dust jacket is included if applicable. No missing or damaged pages, no tears, possible very minimal creasing, no underlining or highlighting of text, and no writing in the margins.