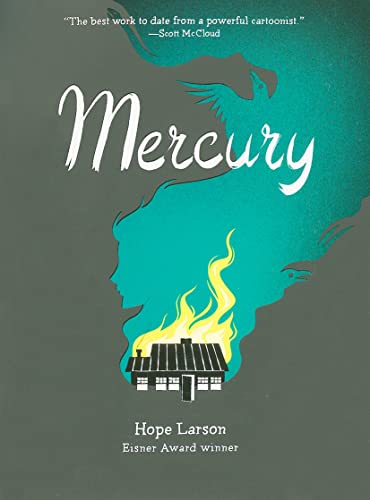 Used Price
$26.99
inc. GST
Free Shipping in Australia
In Mercury, Hope Larson weaves together history, romance, and magical realism in this graphic novel of how the past haunts a teenage girl's present.
Reviews:
Trustpilot
Very Good

August 31, 5:15 PM, French Hill, Nova Scotia: A girl named Tara is running. She runs through her nice neighborhood and up a road to the burned ruins of what was once a beautiful house--her family's house.

August 31, 1859, French Hill, Nova Scotia: A girl named Josey is picking blackberries with her friend Connie. As the girls gossip, a handsome stranger knocks on the door of Josey's house. His name is Asa, and with his coming, Josey's life--and later in time, Tara's as well--is about to change forever.

Because there is treasure in the woods that belong to Josey's family. Gold--an untold fortune. Asa has a secret way of finding it, and his partnership with Josey's father could make them all rich. But there is darkness in the woods, and in Asa. And in the present day, Tara, Josey's descendent, is about to discover the truth about what really happened in the family's past.

Eisner award winner Hope Larson weaves together history, romance, and a touch of her trademark magical realism in this remarkable graphic novel of how the past haunts a teenage girl's present.

*"The beautifully rendered black-and-white drawings capture the gorgeous, magical, and mundane details of both time periods. The tales are by turns mystical, funny, suspenseful, and tender. Graphic novels make great fodder for voracious readers and offer encouragement to reluctant ones, and it is supremely satisfying to see yet another excellent girl-focused offering from Larson." --Quill & Quire, STARRED REVIEW

Hope Larson is the author of Who Is AC? and the author-illustrator of Mercury, Chiggers, Gray Horses, and Salamander Dream, which Publishers Weekly named one of 2005's best comics. She won a 2007 Eisner Award, the highest honor for a comic artist. She lives with her husband in Los Angeles. You can visit her at HopeLarson.com.

GOR004774119
Mercury by Hope Larson
Hope Larson
Used - Very Good
Paperback
Simon & Schuster
2010-01-05
240
1416935886
9781416935889
N/A
Book picture is for illustrative purposes only, actual binding, cover or edition may vary.
This is a used book - there is no escaping the fact it has been read by someone else and it will show signs of wear and previous use. Overall we expect it to be in very good condition, but if you are not entirely satisfied please get in touch with us.