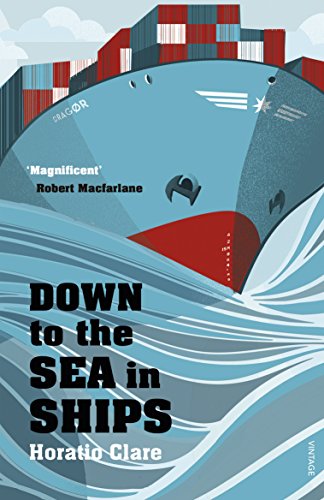 Down To The Sea In Ships
by Horatio Clare

In Stock
$17.99
inc. GST
'Magnificent' Robert Macfarlane Winner of the Stanford Dolman Travel Book of the YearOur lives depend on shipping but it is a world which is largely hidden from us. As the ships cross seas of history and incident, seafarers unfold the stories of their lives, and a beautiful and terrifying portrait of the oceans and their human subjects emerges.
Very Good Good
16 in stock

Down To The Sea In Ships Summary

Down To The Sea In Ships: Of Ageless Oceans and Modern Men by Horatio Clare

'Magnificent' Robert Macfarlane Winner of the Stanford Dolman Travel Book of the Year Our lives depend on shipping but it is a world which is largely hidden from us. In every lonely corner of every sea, through every night, every day, and every imaginable weather, tiny crews of seafarers work the giant ships which keep landed life afloat. These ordinary men live extraordinary lives, subject to dangers and difficulties we can only imagine, from hurricanes and pirates to years of confinement in hazardous, if not hellish, environments. Horatio Clare joins two container ships on their epic voyages across the globe and experiences unforgettable journeys. As the ships cross seas of history and incident, seafarers unfold the stories of their lives, and a beautiful and terrifying portrait of the oceans and their human subjects emerges. 'Tremendous' The Times

Down To The Sea In Ships Reviews

"Wonderful... Clare's account of his journeys with the officers and crews of container ships is gripping and stomach-churning in equal measure" * Daily Telegraph *
"[A] beautifully written account of seafaring life" -- Ian Critchley * Sunday Times *
"A lyrical, heartfelt but eye-opening chronicle... Both romantic and realistic, written from the heart but crafted with a seafarer's "passionate precision", [Clare's] book will steer you into the new year on a course that may deepen your grasp both of that world, and of ourselves" -- Boyd Tonkin * Independent *
"If you can't run away to sea (though I recommend you do), Clare's book is a warm and captivating companion to it" * Guardian *
"Stupendous and extraordinarily exciting... What Clare demonstrates, even beyond his undoubted gifts as writer, is his basic humanity. I read his wonderful book with gratitude for his insight - but also with increased admiration for the men to whom we owe almost everything in our comfortable and secure lives" -- Philip Hoare * Times Higher Education *
"Rich and dense, full of old sea-dog stories, with barely a word wasted, it's a triumph of quiet artistry" -- Marcus Berkmann * Daily Mail *
"This is a warm and lyrical book about a tough trade in tough times" -- Sara Wheeler * Observer *
"Wonderful... Clare's writing is fluid, light and eminently readable, but perhaps his greatest asset is his empathy" -- Philip Hoare * Sunday Telegraph *
"Clare's powers of plain description are tremendous" -- Libby Purves * The Times *
"A fabulous account... There is Conradian insight in Clare's portrayal of the crews to which he is supernumerary, from the captain who hums as he negotiates narrow channels to the first mate constantly crunching carrots" -- Giles Foden * Conde Nast Traveller *

Horatio Clare is the bestselling author of the memoirs Running for the Hills and Truant and the travel books A Single Swallow (which follows the birds' migration from South Africa to the UK), Down to the Sea in Ships (the story of two voyages on container vessels) and Orison for a Curlew, a journey in search of one of the world's rarest birds. His books for children include Aubrey and the Terrible Yoot and Aubrey and the Terrible Ladybirds. Horatio's essays and reviews appear on BBC radio and in the Financial Times, the Observer and the Spectator, among other publications. He lives with his family in West Yorkshire.

GOR006589386
Down To The Sea In Ships: Of Ageless Oceans and Modern Men by Horatio Clare
Horatio Clare
Used - Very Good
Paperback
Vintage Publishing
2015-02-05
368
0099526298
9780099526292
Winner of Dolman Travel Book of the Year 2014 (UK) Short-listed for Wales Book of the Year 2015 (UK) Short-listed for The Mountbatten Maritime Award 2014 (UK) Short-listed for Society for Nautical Research Anderson Medal 2015 (UK)
Book picture is for illustrative purposes only, actual binding, cover or edition may vary.
This is a used book - there is no escaping the fact it has been read by someone else and it will show signs of wear and previous use. Overall we expect it to be in very good condition, but if you are not entirely satisfied please get in touch with us.