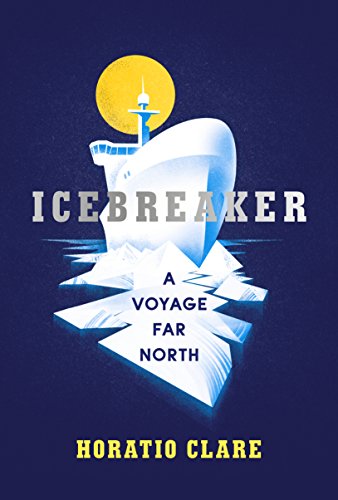 'We are celebrating a hundred years since independence this year: how would you like to travel on a government icebreaker?'

A message from the Finnish embassy launches Horatio Clare on a voyage around an extraordinary country and an unearthly place, the frozen Bay of Bothnia, just short of the Arctic circle.

'We are celebrating a hundred years since independence this year: how would you like to travel on a government icebreaker?'

A message from the Finnish embassy launches Horatio Clare on a voyage around an extraordinary country and an unearthly place, the frozen Bay of Bothnia, just short of the Arctic circle. Travelling with the crew of Icebreaker Otso, Horatio, whose last adventure saw him embedded on Maersk container vessels for the bestseller Down to the Sea in Ships, discovers stories of Finland, of her mariners and of ice.

Finland is an enigmatic place, famous for its educational miracle, healthcare and gender equality - as well as Nokia, Angry Birds, saunas, questionable cuisine and deep taciturnity. Aboard Otso Horatio gets to know the men who make up her crew, and explores Finland's history and character. Surrounded by the extraordinary colours and conditions of a frozen sea, he also comes to understand something of the complexity and fragile beauty of ice, a near-miraculous substance which cools the planet, gives the stars their twinkle and which may hold all our futures in its crystals.

Icebreaker sails with a phlegmatic Finnish crew into threatening and threatened polar waters... Clare's witty prose, filled with vivid descriptions, bears witness to the melting skin of our fragile planet and all that its loss might mean for our souls -- Philip Hoare * New Statesman Books of the Year *
Clare has a gift for pinning to the page all that comes his way. His is a joy in framing with such precision and flair that it is the opposite of indulgent, allowing the reader to share in his own marvellous encounters... nimble, vital, unexpectedly affecting -- Stephanie Cross * Observer *
Icebreaker has many of the pleasures of classic travel writing: a pure sense of visiting another world in the company of an eloquent guide. But this is not a backward-looking book, and its warning for the future is clear... The Met Office estimates the Arctic could be seasonally ice-free by the 2040s. It may not be many decades, then, until Clare's travelogue is a record of a vanished world -- Erica Wagner * Financial Times *
Light fills his writing... Mr Clare is a great enjoyer -- of people, landscape, and above all of language * Economist *
Salted with excellent topographical language... Clare has an ear and an eye for words... one can't have enough of the big white -- Sara Wheeler * Spectator *
A voyage into the Arctic on an icebreaking ship with one of Britain's best writers of nature and place. You feel the cold leaping off the pages * Big Issue (Books of the Year) *
Clare's prose is so brilliantly evocative and so rich with awe, this book could sit as comfortably next to Grimm's fairytales as it does in the travel section... With an elegiac Keatsian sensibility, he depicts "the making and melting of ice" so seductively that reaching the end of this wonderful book feels like stumbling out of a Finnish sauna into a cold shower -- Jane Graham * Big Issue *
Offers some telling and often amusing insights into the Finnish way of life while at the same time explaining how the work of an icebreaker crew fits into the increasingly complex geopolitical picture in the far north... he writes with perceptiveness and precision about the ways in which global warming are already starting to change the geography of the region... powerfully evocative -- Roger Cox * Scotsman *
A hilarious, off-beat travelogue in the tradition of Eric Newby and Redmond O'Hanlon. Warm and witty, Clare catches an important moment in the unfolding of climate change, and shows why we should all pay attention to what's happening in the ice -- Gavin Francis
Captivating... Clare himself is a charming companion for the reader. His narrative encompasses both the past and a highly charged now - Finnish history interwoven with instantaneous thrills as the ship grinds and slides through a world that most of us will never experience... a delightful mix of mariner-rime reportage, local colour and Finnish history -- Roy Wilkinson * Caught By The River *
Takes us to Finland to consider the fragility of our world; Clare's wryly philosophical and wonderfully humorous travelogue crackles and coruscates. From overheated summer to ice-bound waters, both books peer at potential disaster with brilliant wit and exquisite observation -- Phiip Hoare * New Statesman Books of the Year *
A highly original reflection on military rivalries - and on the beauty of compacted sea ice and diamond northern skies. -- Lorna Bradbury * World of Cruising *
A powerful and stirring account. * Nautilus International Telegraph *
A brief but compelling journey. -- Clare Saxby * The Times Literary Supplement *

Horatio Clare is the bestselling author of the memoirs Running for the Hills and Truant and the travel books A Single Swallow (which follows the birds' migration from South Africa to the UK), Down to the Sea in Ships (the story of two voyages on container vessels) and Orison for a Curlew, a journey in search of one of the world's rarest birds. His books for children include Aubrey and the Terrible Yoot and Aubrey and the Terrible Ladybirds. Horatio's essays and reviews appear on BBC radio and in the Financial Times, the Observer and the Spectator, among other publications. He lives with his family in West Yorkshire.

GOR008782505
Icebreaker: A Voyage Far North by Horatio Clare
Horatio Clare
Used - Like New
Hardback
Vintage Publishing
2017-11-09
224
1784741957
9781784741952
Short-listed for Wales Book of the Year 2018 (UK)
Book picture is for illustrative purposes only, actual binding, cover or edition may vary.
The book has been read, but looks new. The book cover has no visible wear, and the dust jacket is included if applicable. No missing or damaged pages, no tears, possible very minimal creasing, no underlining or highlighting of text, and no writing in the margins.