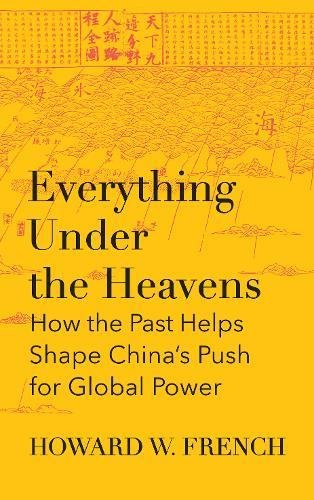 Everything Under the Heavens by Howard French

Everything Under the Heavens: how the past helps shape China's push for global power by Howard French

A book of the year for The National.

An incisive investigation of China's ideological development as it becomes an ever more aggressive player in regional and global diplomacy.

For many years after Deng Xiaoping initiated the economic reforms that began in 1978 and led to its overtaking the USA as the world's economic powerhouse, China maintained an attitude of false modesty about its ambitions. That diffidence has now been set aside. China has asserted its place among the global heavyweights, revealing its plans for pan-Asian geopolitical dominance by building up its navy, fabricating new islands to support its territorial claims in areas like the South China Sea, and diplomatically bullying smaller players.

Underlying this shift in attitude is a strain of thinking that casts China's present-day actions in historical terms. China is now once more on the path to restoring the glories of its dynastic past. Howard W. French demonstrates that if we can understand how that historical identity informs current actions - in ways ideological, philosophical, and even legal - we can learn to forecast just what kind of global power China intends to become - and to interact wisely with the superpower.

'Brilliantly fuses history and reportage to explore China's relationships with its neighbours..'

'[An] essential reminder about the unparalleled influence of the past on China's political present ... One of the most lucid and illuminating books on China's conception of power and its place in the world ... Fascinating.'

'One wishes his book could have been longer, as it is the best I have read so far this year ... fascinating.'

'Stimulating ... This book is a reminder that China's international relations take place in a historical context going back centuries if not millennia, and Mr. French is an engaging guide through that deeper history.'

* The New York Review of Books *

'[Howard W. French] analyses the South China Sea crises and Chinese behaviour incisively and with a minimum of hysteria. That is a useful contribution.'

'In the brilliant Everything Under the Heavens, Howard French offers a sweeping historical view of China's relentless attempt to build an Asian world order around its unchallenged authority. French's meticulously reported and beautifully written book is disquieting but essential reading.'

'In Everything Under the Heavens, Howard French has written an absorbing and penetrating dissection of the deep roots of China's claims to large swathes of the oceans off Japan and south-east Asia, with profound implications for control over vitally important global trade. French understands that China's sense of historical entitlement is both deeply emotional and crudely political, and allows Beijing to pretend to stand with Asia, while standing over it at the same time.'

-- Richard McGregor, author of The Party: The Secret World of China's Communist Rulers

'Taking full account of China's achievements and ambitions, without being panicked by them or losing sight of China's vulnerabilities, will be a major challenge for the next generation in the rest of the world - and in China itself. Howard French very lucidly lays out a guide to thinking about the next stage in China's evolution, and the positive signs and danger signals to be watching for.'

'Howard French has tackled what is perhaps the most important issue of our time, and of many years to come, with the vivid prose of a first-rate reporter, the scholarship of an excellent historian, and great human sympathy.'

'With Everything Under the Heavens, Howard French brings us a wonderfully well-researched and elegantly written book about what we might call China's 'shape memory.' If you're wondering why this singular country acts as it does, this volume will go a long way to explaining it.'

Everything Under the Heavens is the most persuasive account I've ever read of how China's history shapes its foreign policy and that of its neighbors today. A subtle and beautifully written book that offers surprising lessons for how Americans and Asians should respond to China's rise. Strongly recommended for policy makers and citizens alike.'

'Impressive ... Masterful ... An excellent introduction to the complex issues of East Asia and the potential for conflict in this critical region of the world.'

'A deep historical and cultural study of the meaning of China's rise ... Fascinating ... Convincing.'

'Nuanced ... The detail of [French's] scholarship and reporting is matched by the suppleness of his prose ... This will be a useful, and necessary, starting point for informed discussion.'

'Through [French's] considered analysis and investigations, the scale of 21st-century Chinese ambition, and its determination not to be simply absorbed into the Western liberal order, become powerfully evident ... French lucidly illuminates the specifics of these ambitions with detailed historical investigation, turning over some long-held truisms along the way ... Everything Under the Heavens provides the best account we currently have of the cultural and historical influences on China's 21st century aspirations.'

* Asian Review of Books *
Howard W. French wrote from Africa for The Washington Post and at The New York Times was bureau chief in Central America and the Caribbean, West and Central Africa, Japan, and China. He is the recipient of two Overseas Press Club awards and a two-time Pulitzer Prize nominee. He is the author of A Continent for the Taking: the tragedy and hope of Africa and China's Second Continent: how a million migrants are building a new empire in Africa.
NGR9781911344339
9781911344339
1911344331
Everything Under the Heavens: how the past helps shape China's push for global power by Howard French
Howard French
New
Hardback
Scribe Publications
2017-04-13
352
N/A
Book picture is for illustrative purposes only, actual binding, cover or edition may vary.
This is a new book - be the first to read this copy. With untouched pages and a perfect binding, your brand new copy is ready to be opened for the first time
Trustpilot