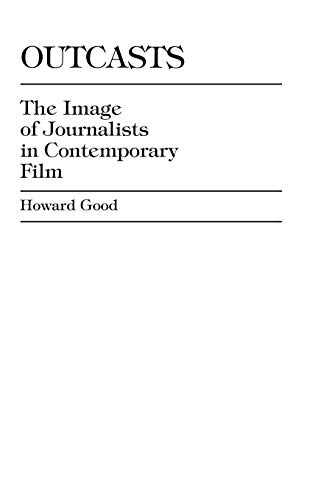 Outcasts: The Image of Journalists in Contemporary Film by Howard Good

This book examines how representative films about journalism from the early 1960s to the mid-1980s allegorized the working life of the journalist. The central chapters deal with three popular images of journalists: the war correspondent, the scoop- crazed reporter or ratings-hungry TV executive, and the investigative journalist. Among the films discussed are The Green Berets, The Killing Fields, Under Fire, Absence of Malice, Network, The China Syndrome, and All the President's Men.

...readable and frequently insightful....unique addition to the literature of journalism... * CHOICE *
...hard-hitting... -- Ivan Butler * Film Review Annual *
Howard Good is offering those of us who thrash around in the field of journalism... this examination of ourselves... -- Bill Kovach, founder of the Committee of Concerned Journalists * Nieman Reports *

Howard Good (BA, literature, Bard College; MA, journalism, University of Iowa; Ph.D., American culture, University of Michigan) is Associate Professor of Journalism at the State University of New York, College at New Paltz. He spent five years working on daily newspapers including the Ann Arbor News in Michigan, the Grand Forks Herald in North Dakota, and the Charlotte Observer in North Carolina. His articles have appeared in Journalism Monographs, Journalism Quarterly, Journalism Educator, American Journalism, The Quill, and The Chronicle of Higher Education. He is the author of Acquainted with the Night: The Image of Journalists in American Fiction, 1890-1930 (Scarecrow, 1986).

GOR009685829
Outcasts: The Image of Journalists in Contemporary Film by Howard Good
Howard Good
Used - Good
Hardback
Scarecrow Press
1989-02-01
195
0810821621
9780810821620
N/A
Book picture is for illustrative purposes only, actual binding, cover or edition may vary.
This is a used book - there is no escaping the fact it has been read by someone else and it will show signs of wear and previous use. Overall we expect it to be in very good condition, but if you are not entirely satisfied please get in touch with us.