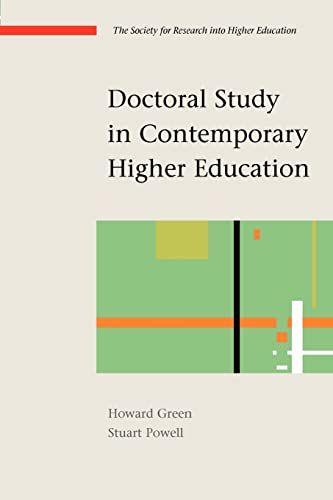 Covers the differing kinds of doctorate award and discusses the issues that arise from the ways in which related forms of doctoral study are organized and assessed. This book focuses on doctoral study, in its various forms, in the higher education sector in the United Kingdom.

This book covers the differing kinds of doctorate award that exist currently and discusses critically issues that arise from the ways in which related forms of doctoral study are organized and assessed. It focuses on doctoral study, in all its forms, in the higher education sector in the United Kingdom, while being contextualised within an international dimension.

Drawing on both quantitative and qualitative data, the book focuses on the diversity in doctoral study. It examines the current state of the full range of doctoral awards, describes them, and then critically analyses tensions that exist. For example, it assesses the definitions and relations between different kinds of doctoral award, the pedagogy that surrounds them and the examination phases of each. The book also offers suggestions of ways to resolve the tensions associated with different forms of study and indicates possible future directions.

Doctoral Study in Contemporary Higher Education is an essential text for those who manage, fund and deliver education at doctoral level.

Stuart Powell is Professor of Educational Psychology and Director of Research Degrees at the University of Hertfordshire. He is also Honorary Secretary of the UK Council for Graduate Education. His original research interests were in the understanding and education of individuals with special needs - in particular those with autism. More recently, his research has focused on doctoral study.

Part 1: Context
The origins, issues and recent development of doctoral study in the UK
Doctoral study, Government and the workplace

Part 2: Range of doctoral awards in the UK
The PhD and the diversity of doctoral study
The PhD by published work
Professional doctorates
Practice-based doctorates

Part 4: Managing doctoral study
The nature of doctoral supervision
Monitoring and assessment
Principles and purposes of doctoral examination
Processes of examining the doctorate

Part 5: The future of the doctorate
Future directions

GOR010567329
Doctoral Study in Contemporary Higher Education by Howard Green
Howard Green
Used - Like New
Paperback
Open University Press
2005-07-01
288
0335214738
9780335214730
N/A
Book picture is for illustrative purposes only, actual binding, cover or edition may vary.
The book has been read, but looks new. The book cover has no visible wear, and the dust jacket is included if applicable. No missing or damaged pages, no tears, possible very minimal creasing, no underlining or highlighting of text, and no writing in the margins
Trustpilot