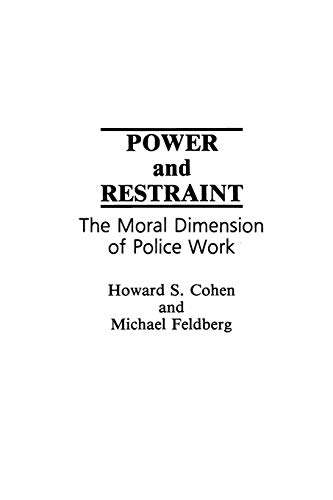 These developed standards of ethical behavior can be used as a basis for the rehearsal of decision-making and action in police training as well as for the judicious evaluation of police behavior after the fact.

Power and Restraint: The Moral Dimension of Police Work by Howard S. Cohen

In accepting the authority to govern, what responsibilities do the police incur? Power and Restraint answers this question by using a moral perspective grounded in the social contract, and by defining an ethical basis for police work. Howard S. Cohen and Michael Feldberg posit five standards by which to measure responsible police behavior: fair access, public trust, safety and security, teamwork, and objectivity. To test their proposals, Cohen and Feldberg apply these standards to several familiar yet challenging cases that are encountered in municipal patrol work in the United States, illustrating how police officers can develop appropriate moral responses to complex and difficult circumstances. These developed standards of ethical behavior can be used as a basis for the rehearsal of decision-making and action in police training as well as for the judicious evaluation of police behavior after the fact. The authors developed their theories over a 10-year period by spending hundreds of hours in seminars on police ethics with officers and trainers from across the country, carefully discussing specific cases and examples of moral issues that were most troubling to the officers themselves. With its systematic and integrated approach to the analysis and evaluation of cases, this timely work extends the field of police ethics.

The two-section volume begins with an introduction that describes how the authors arrived at the system of ethical standards that is developed in detail in the three chapters of Part I. In Part II, four chapters present challenging scenarios that test the developed standards in the context of real policing situations, addressing such issues as excessive force, gratuities and corruption, balancing individual rights with keeping the peace, and sorting through the conflict between loyalty to colleagues and telling the truth under oath about possible wrongdoing. This book will be invaluable to instructors in university-level criminal justice courses that deal with ethics or the police. It could also be used in courses in applied ethics in philosophy and will be an important resource for police academy trainers for both in-service and recruit training.

HOWARD S. COHEN is Associate Provost and Professor of Philosophy at the University of Massachusetts--Boston. He developed a seminar in ethics for police trainers and curriculum developers at the Boston University Law Enforcement Trainers Institute and has published widely on issues relating to philosophy and criminal justice since 1973. His previous book, Equal Rights for Children, was published in 1980.

MICHAEL FELDBERG is President of The Boston-Fenway Program, Inc., a community service organization specializing in public and community safety issues. He is the former director of the Criminal Justice Program at Metropolitan College, Boston University, where he currently holds the rank of Adjunct Professor of Urban Affairs and Criminal Justice. His previous books include The Philadelphia Riots of 1844: A Study of Ethnic Conflict (Greenwood Press, 1975), Moral Issues in Police Work (edited with Frederick Elliston), and Ethics for Professional Police (with Howard Cohen).

Preface Introduction Standards of Police Ethics The Moral Dimensions of Police Work A Social Contract Perspective on the Police Role Moral Standards for Police Work Applying the Standards to Cases Rock Concert Dispute over a Bicycle Calling in a Favor Child Molester Conclusion Bibliography Index
NLS9780275938567
9780275938567
0275938565
Power and Restraint: The Moral Dimension of Police Work by Howard S. Cohen
Howard S. Cohen
New
Hardback
ABC-CLIO
1991-06-30
186
N/A
Book picture is for illustrative purposes only, actual binding, cover or edition may vary.
This is a new book - be the first to read this copy. With untouched pages and a perfect binding, your brand new copy is ready to be opened for the first time
Trustpilot