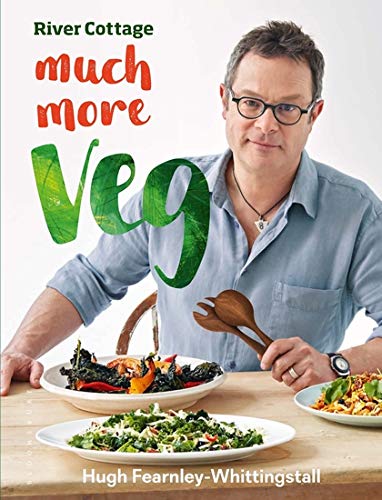 Want to cook more veg for your family, but have no idea where to start? Hugh Fearnley-Whittingstall is here to help, with a whole host of veg-centric recipes that are easy, foolproof and delicious. Let's 'Eat Them To Defeat Them'! Hugh's River Cottage Veg Every Day! became the UK's best-selling vegetable cookbook, persuading us through sheer temptation to make vegetables the mainstay of our daily cooking. In this much-anticipated follow-up, Hugh delivers more irresistible recipes, and this time, takes things one step further. Fuelled by his passionate belief that plant foods should be the dominant force in our kitchens, Hugh has put cheese, butter, cream, eggs, and refined flour and sugar firmly to one side. Instead, he uses veg, fruit, wholegrains, nuts, seeds, spices and cold-pressed oils to explore the length and breadth of what can be achieved with natural, unprocessed plant foods. River Cottage Much More Veg! makes it clear that unadulterated ingredients are the very best building blocks for delicious and healthy meals. In typical Hugh style, the recipes are easy, utterly foolproof,delicious, and full of plenty of swap-out suggestions. All but a handful are gluten-free, and at least half the dishes require 20 minutes (or less) hands-on work time. With recipes such as Roast squash and chickpeas with spicy apricot sauce, Blackened cauliflower with pecans and tahini, Spiced beetroot, radicchio and orange traybake, Celeriac and seaweed miso broth, Seared summer cabbage with rosemary, chilli and capers, and Baked celery agrodolce, River Cottage Much More Veg! demonstrates how easy it is to make versatile, plentiful and delicious vegetables the bedrock of your diet.

Veggie-based recipes that are not only scrumptious, but use natural unprocessed ingredients to create the healthiest meals * The Times *
Veg out with a River Cottage meat-free feast * Daily Telegraph *
Vegans rejoice * Diana Henry, Daily Telegraph *
Colourful, mouthwatering recipes that can't fail to inspire. A brilliant addition to the kitchen bookshelf for vegans, veggies and meat-eaters alike * Good Housekeeping *
Fearnley-Whittingstall excels at making vegetables the star of the show, creating flavourful and adventurous dishes * Independent *
Make the most of vitamin-packed seasonal veggies with these fantastic recipes from Hugh Fearnley-Whittingstall * Healthy Diet *
Set to become our new favourite cookbook * Veggie *
Much more than veg * Yorkshire Post *
With simple recipe names and beautiful food photography, this book is perfect to have neatly displayed on a coffee table, dog-eared and oil-stained on a kitchen bench, or wrapped up as a gift * Vegetarian *
These recipes are good, inventive and welcoming * Evening Standard *

Hugh Fearnley-Whittingstall is a writer, broadcaster and campaigner. His River Cottage books have collected multiple awards including the Andre Simon Food Book of the Year, and the hugely influential Hugh's Fish Fight has earned him a BAFTA as well as awards from Radio 4, the Observer and the Guild of Food Writers. Hugh lives in Devon with his family. rivercottage.net / @rivercottage

GOR008763349
River Cottage Much More Veg: 175 vegan recipes for simple, fresh and flavourful meals by Hugh Fearnley-Whittingstall
Hugh Fearnley-Whittingstall
Used - Like New
Hardback
Bloomsbury Publishing PLC
2017-09-21
416
1408869004
9781408869000
N/A
Book picture is for illustrative purposes only, actual binding, cover or edition may vary.
This is a used book - there is no escaping the fact it has been read by someone else and it will show signs of wear and previous use. Overall we expect it to be in very good condition, but if you are not entirely satisfied please get in touch with us.