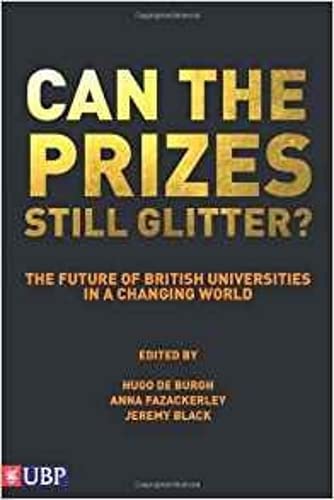 Can The Prizes Still Glitter?
by Hugo de Burgh

Can The Prizes Still Glitter? Summary

Can The Prizes Still Glitter? by Hugo de Burgh

Can The Prizes Still Glitter? is the inaugural publication of Agora, a new independent think tank which focuses on the future of our universities. Edited by Hugo de Burgh (Editor of China in Britain, Professor of Journalism and Director of the China Media Centre at the University of Westminster), Anna Fazackerley (Director of Education Think Tank Agora) and Jeremy Black (Professor of History at Exeter University), Can The Prizes Still Glitter? is a fascinating insight into Britain's academic institutions in an ever-changing world.

Thirty-four contributors including eight vice chancellors, politicians, business leaders and academics from a variety of disciplinary backgrounds and institutions have included personal essays on their views about the state of Britain's universities and where they ought to be.

They confront many of the big, and often uncomfortable issues facing Britain, and present some of the solutions undertaken by certain institutions in order to highlight the difficult decisions faced by politicians and university leaders.

If British institutions seek to match the rapid progress seen elsewhere in the world, we need to get moving...

Hugo de Burgh is Professor of Journalism at the University of Westminster, where he set up the China Media Centre in 2005. He is also Professor in the School of Media & Communications at Tsinghua University. Previously he was a journalist and television producer for Scottish Television, BBC and (the UK s) Channel4. He has published books on British investigative journalism, Chinese journalism, the professional formation of journalists around the world and on environment journalism.

GOR003860434
Can The Prizes Still Glitter? by Hugo de Burgh
Hugo de Burgh
Used - Very Good
Paperback
The University of Buckingham Press
2007-05-24
314
095546420X
9780955464201
N/A
Book picture is for illustrative purposes only, actual binding, cover or edition may vary.
This is a used book - there is no escaping the fact it has been read by someone else and it will show signs of wear and previous use. Overall we expect it to be in very good condition, but if you are not entirely satisfied please get in touch with us.