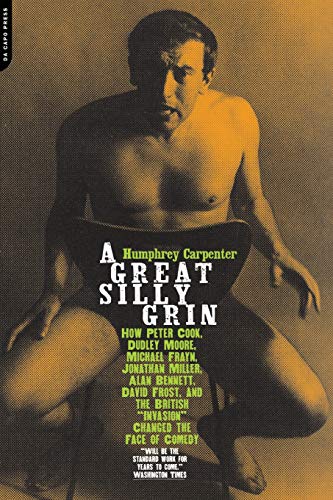 Out of Stock
$34.99
inc. GST
A vibrant history of the British satire explosion of the early 1960s and its lasting influence on comedy.
Well Read
Only 0 left

A Great, Silly Grin opens at the 1960 Edinburgh Festival, where a staggeringly inspired satirical revue called Beyond the Fringe startled a public steeped in the polite, bland banality of the 1950s. From there it is a short trip to the coffee bars of London, where the appearance of a scruffy yellow pamphlet calling itself Private Eye overturned the way Britons looked at their world. The apotheosis of the satire boom, and the progenitor of so many American comedy acts, was the groundbreaking BBC television program "That Was the Week That Was," which combined elements of sketch comedy and evening-news broadcast to produce something essential, hilarious, and, on occasion, scandalous. Humphrey Carpenter's history of this tumultuous and exciting era introduces us not only to the people involved in its creation--Peter Cook, Dudley Moore, Michael Frayn, Jonathan Miller, Alan Bennett, and David Frost--but also their routines and sketches.

"Carpenter has pulled off a rare feat, writing serious history with a lot of laughs."
"Will be the standard work for years to come."

GOR010312658
A Great, Silly Grin by Humphrey Carpenter
Humphrey Carpenter
Used - Well Read
Paperback
INGRAM PUBLISHER SERVICES US
2003-05-08
408
0306812053
9780306812057
N/A
Book picture is for illustrative purposes only, actual binding, cover or edition may vary.
This is a used book. We do our best to provide good quality books for you to read, but there is no escaping the fact that it has been owned and read by someone else previously. Therefore it will show signs of wear and may be an ex library book.