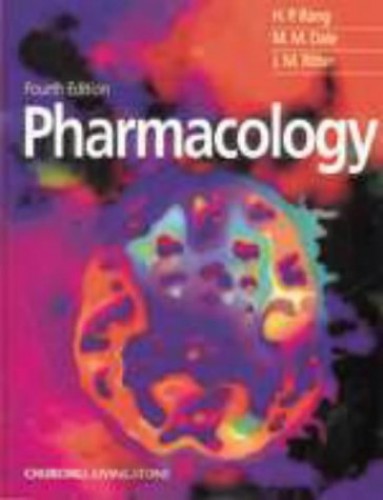 In Stock
$20.99
+10% GST
The aim of this work is not only to describe what drugs do, but to emphasize the mechanisms by which they act - where possible at the cellular and molecular level.
Very Good Good
Only 2 left

The aim of this work is not only to describe what drugs do, but to emphasize the mechanisms by which they act - where possible at the cellular and molecular level. Therapeutic agents have a high rate of obsolescence and many new ones are introduced each year; an appreciation of the mechanisms of action of the class of drugs to which a new agent belongs provides a starting point for understanding and using intelligently.

"Rang & Dale are now due more praise for their new improved version of Pharmacology. As before the writing is excellent and surely undergraduates can master a subject when it is explained so lucidly and with evident enthusiasm. As a comprehensive textbook for pharmacy or pharmacology students it has few rivals. As a guide to help continuing education in modern pharmacology it should be both useful and enjoyable." British Journal of Hospital Medicine

HP Rang
Professor HP Rang obtained his first degree in Physiology at University College London, and went on to graduate in Medicine before moving to the Department of Pharmacology in Oxford. There he gained a DPhil, and wasappointed to a University Lectureship in Pharmacology and a Fellowship at Lincoln College, Oxford. He became Professor and Head of Department at St George's Hospital Medical School and later at University College London, and he was Director of the Novartis (formerly Sandoz) Institute for Medical Research, based at University College. Professor Rang was elected a Fellow of the RoyalSociety in 1980. Since retiring in 1999, he has worked as a consultant to pharmaceutical and biotechnology companies. He has published many research papers, mainly in the fields of receptor pharmacology and neuroscience.

With Dr Maureen Dale he wrote the first edition of Pharmacology (1987),and Professor Jim Ritter became a co-author for the third and subsequent editions. He is currently preparing a new book on Drug Discovery, to be published by Harcourt.

Dr Dale has been an editor of the British Journal of Pharmacology. Before retiring fromUCL in 1991, her research areas were the immunopharmacology of asthma and rheumatoid arthritis.

Professor Jim Ritter is Head of the Department of Clinical Pharmacology at Guy's King's and St Thomas' School of Medicine (King's College, London, UK). His first degree was in Animal Physiology and he obtained a D Phil in Pharmacology before completing clinical medicine at the Radcliffe Infirmary (Oxford). His basic medical training was in Oxford, London and the Johns Hopkins Hospital (Baltimore, USA), where he was chief resident for two years. Subsequent specialist training in clinical pharmacology was at Hammersmith Hospital (London). He is an honorary consultant physician at Guy's and St Thomas' NHS Trust where he shares in the acute general medical take, and sees outpatients in the hypertension and vascular disease prevention clinics. His research is in human vascular pharmacology, especially of endothelium-derived mediators. He sat on the sub-committee on safety and efficacy of CSM, has chaired local and multicentre research ethics committees, and currently chairs the Thames Specialty Training Committee in Clinical Pharmacology. He is one of the two editors of the British Journal of Clinical Pharmacology.

GOR001419869
Pharmacology by Humphrey P. Rang
Humphrey P. Rang
Used - Very Good
Paperback
Elsevier Health Sciences
1999-04-06
832
0443059748
9780443059742
N/A
Book picture is for illustrative purposes only, actual binding, cover or edition may vary.
This is a used book - there is no escaping the fact it has been read by someone else and it will show signs of wear and previous use. Overall we expect it to be in very good condition, but if you are not entirely satisfied please get in touch with us.