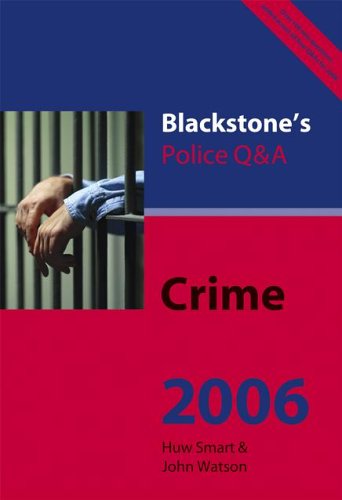 Used Price
$16.99
inc. GST
Free Shipping in Australia
Contains many multiple-choice questions that help to reinforce understanding of the Police Manuals. This book focuses on crime and covers a variety of topics, including the Asylum and Immigration Act 2004, the Criminal Justice Act 2003, the Children Act 2004, the Domestic Violence, Crime and Victims Act 2004 and the Gangmasters Licencing Act 2004.
Reviews:
Trustpilot
Very Good

Designed to mirror the best-selling "Blackstone's Police Manuals", this series is written by experienced and highly successful question writers. Each Q&A book contains 100s of multiple-choice questions designed to reinforce knowledge and understanding of all four Police Manuals, and to highlight any gaps or weaknesses in that knowledge. Following subjects in the same sequence as the Manuals and drawing upon the relevant text, the "Blackstone's Police Q&As" are essential revision material for all police officers sitting the OSPRE [registered] Part 1 promotion examinations. The 2006 editions of this popular series contain substantial updates, reflecting changes to the 2006 versions of the "Blackstone's Police Manuals", and also now contain handy paragraph references to the relevant Manual and a question checklist to mark the answers. This new edition focuses on crime and has been revised and update to include new questions on important areas of the law such as: the Asylum and Immigration (Treatment of Claimants etc) Act 2004, the Criminal Justice Act 2003, the Children Act 2004, the Domestic Violence, Crime and Victims Act 2004, the Gangmasters Licencing Act 2004, and the Criminal Justice and Court Services Act 2000. Other titles in the series are: "Evidence & Procedure Q&A 2006", "Roads Policing Q&A 2006", and "General Police Duties Q&A 2006". This product is not endorsed by CENTREX.

Well structured and balanced...I would recommend then (Blackstones) to all candidates

GOR004090418
Crime: 2006 by Huw Smart
Huw Smart
Blackstone's Police Q & A S.
Used - Very Good
Paperback
Oxford University Press
2005-08-25
185
019928525X
9780199285259
N/A
Book picture is for illustrative purposes only, actual binding, cover or edition may vary.
This is a used book - there is no escaping the fact it has been read by someone else and it will show signs of wear and previous use. Overall we expect it to be in very good condition, but if you are not entirely satisfied please get in touch with us.