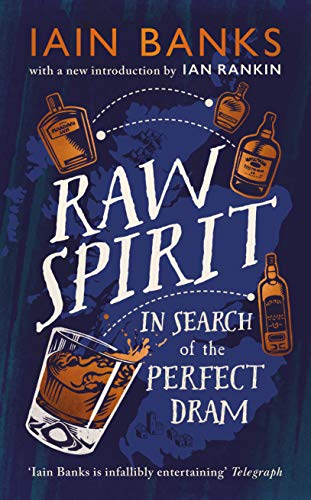 Raw Spirit: In Search of the Perfect Dram by Iain Banks

'One of the most playful and entertaining writers of our generation'
Val McDermid, Guardian

In an absorbing voyage as interesting to non-drinkers as to true whisky connoisseurs, sci-fi and literary author Iain Banks explores the rich heritage of Scottish whisky, from the most famous distilleries to the most obscure operations.

Whisky is more than a drink: it's a culture that binds together people, places and products far across Scotland's rugged terrain. Switching from cars to ferries to bicycles, Banks criss-crosses his homeland, weaving an engrossing narrative full of fascinating traditions, peculiar people, and the downright bizarre places he encounters on his journey down Scotland's great golden road.

'The book I return to most often . . . It's is like slipping into a warm bath.'
James Graham, THE TIMES (playwright and creator of ITV's Quiz)

'Filled withinsightful and witty observations . . . this is a rip-roaringand informative delve into the unique history and enduring appeal of this iconic spirit.'
VISIT SCOTLAND, 9 'must read' books

It does what every good book should manage to do, and what a hundred other books on whisky (and a thousand other books on Scotland) have signally failed to do: makes you want to go for a drink with the author. * Observer *
Studded with bracing shots of pure insight and eloquence. And he's sound on the scotch as well. * Independent *
A very readable and hugely informative book, and Bank's gentle humour permeates the pages. * Time Out *
It's an engaging piece of work, part love letter, part memoir. * Esquire *
A very beguiling fusion of memoir, history and current affairs. * Glasgow Herald *

Iain Banks was born in Scotland in 1954. He came to widespread public notice in 1984 with the publication of his first novel, The Wasp Factory. He went on to gain enormous and popular critical acclaim with further works of fiction and science fiction. In 1993 he was acknowledged as one of the Best of Young British Writers. Iain Banks died in 2013 at the age of fifty-nine.

GOR010238378
Raw Spirit: In Search of the Perfect Dram by Iain Banks
Iain Banks
Used - Very Good
Hardback
Cornerstone
2019-10-17
384
1529124786
9781529124781
N/A
Book picture is for illustrative purposes only, actual binding, cover or edition may vary.
This is a used book - there is no escaping the fact it has been read by someone else and it will show signs of wear and previous use. Overall we expect it to be in very good condition, but if you are not entirely satisfied please get in touch with us.