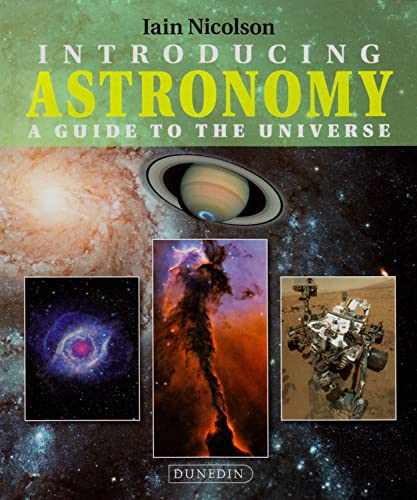 Iain Nicolson explores the origin of the Universe and explains the nature of stars, planets and galaxies, what makes them shine and how they are born, evolve and eventually die.

Introducing Astronomy: A Guide to the Universe by Iain Nicolson

We live on a small planet that revolves round an unexceptional star - the Sun - which is one of the hundred billion stars that populate our galaxy. Of the many billions of galaxies that lie within range of our most powerful telescopes, some are so remote that their light has taken more than 13 billion years to reach us.
Iain Nicolson takes the reader on a journey from planet Earth to the boundaries of the observable Universe. He explains the nature of stars, planets and galaxies, what makes them shine and how they are born, evolve and eventually die. He explores the origin of the Universe as a whole and considers whether life may exist on other worlds.
Copiously illustrated, this book is intended for anyone who is looking for straightforward explanations of what astronomy is all about. It will also serve as an invaluable primer for those who are considering studying the subject more formally.

`This is a delightful little book, aimed at relative newbies to astronomy. It provides an outline of astronomical science and how this knowledge has been achieved.
Its claim to be an introductory guide does not diminish its scope. It deals with the arrangement of the sky, the behavior and properties of the Solar System's family, the structure and life of stars and thence to cosmology. Even the relatively new field of exobiology is given treatment. Underlying all is the thread of how knowledge of the Universe has come to light and the advancing tools used for its exploration. This primer's format gives each subject thoughtful, concise treatment, in manageable bite-sized chunks. This makes it possible to easily absorb one or perhaps two of its chapters at a single sitting. Within the text, one piece of information slips imperceptibly into the next, gently building up a knowledge base, until by a chapter's conclusion a wealth of information has been absorbed.
The author's skill at explaining difficult or convoluted concepts simply is well demonstrated. Taking just one example, the approach used to weigh the components of a binary star system is so elegantly explained that it is fully explained within a single small paragraph. Technical terms have been kept to a necessary minimum, with even these being addressed by a fulsome glossary.
The production quality is remarkably lavish, given the cover price. Indeed, I was unable to open the book at any page (save in the glossary) that did not present one or more full colour images or diagrams,
Completion of this book will leave the reader more than satisfactorily armed to deal with all they meet afterwards in the field of astronomy. The book therefore succeeds very well as an astronomy primer making it an excellent companion for anyone with a new telescope who wishes to understand what they are looking at.' Astronomy Now

'Writing an introduction to astronomy can be a daunting task when you consider the sheer volume of information available, but lain Nicolson has done it well. Introducing Astronomy: A Guide to the Universe is written in an accessible style that takes the reader on a journey of discovery through the most important aspects of both.
The choice of images is impressive, while the many charts and diagrams - clear and informative without being over complex or cluttered - add to the book's usefulness. Overall, it achieves what it sets out to do. This concise introduction to astronomy would make a great gift for those developing an interest in the night sky.'
BBC Sky at Night magazine

Iain Nicolson is a writer and lecturer in the fields of astronomy and space science, and a consultant to the magazine Astronomy Now. He was formerly Principal Lecturer in Astronomy at the University of Hertfordshire.

Acknowledgements. List of tables and illustrations. Preface: The science of the universe. 1 Our place in space; 2 The changing sky; 3 Planets and orbits; 4 The Sun; 5 The Sun's domain; 6 Stars - their properties and variety; 7 Interstellar clouds and the birth, life and death of stars; 8 Galaxies; 9 The evolving universe; 10 Exoplanets and the conditions for life; 11 Tools of the trade, Glossary. Further Reading.

GOR008535111
Introducing Astronomy: A Guide to the Universe by Iain Nicolson
Iain Nicolson
Introducing Earth and Environmental Sciences
Used - Very Good
Paperback
Dunedin Academic Press
2014-09-25
160
1780460252
9781780460253
N/A
Book picture is for illustrative purposes only, actual binding, cover or edition may vary.
This is a used book - there is no escaping the fact it has been read by someone else and it will show signs of wear and previous use. Overall we expect it to be in very good condition, but if you are not entirely satisfied please get in touch with us.