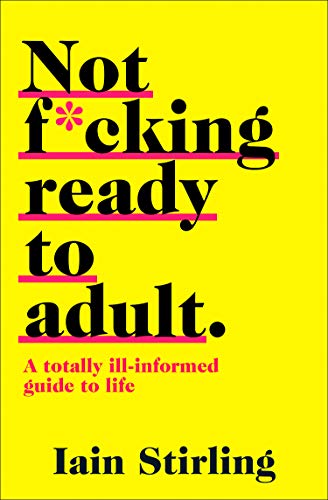 Not F*cking Ready to Adult by Iain Stirling

Comedian Iain Stirling knows a lot about f*cking up. And he's ready to share.

Not F*cking Ready to Adult: A Totally Ill-informed Guide to Life by Iain Stirling

Comedian Iain Stirling knows a lot about f*cking up. And he's ready to share.

From the brilliantly funny voice behind the BAFTA-winning smash hit Love Island comes a scrutinising dissection of millennial life, giving the finger to 'adulthood' (whatever that means) along the way.

Throughout life millennials have been taught that they are perfect and should live a perfect life. They've been told, whatever happens, don't screw up. So is it any wonder they have acquired an image of being self-obsessed, work-shy, mollycoddled egomaniacs? Iain argues that beneath this facade is a misunderstood generation with a crippling fear of failure. And it's time for this to change.

Provocative and full of his razor-sharp wit, Not F*cking Ready to Adult is Iain's guide to what life is really like for millennials and how they can navigate it better.

Things the press have said about Iain on Love Island:

'Love Island is really funny, thanks in no small part to Scottish comedian Iain Stirling's voiceover.' The Guardian

'There's only one true winner of Love Island: and that's Iain Stirling... He's enchanting the show's millions of viewers' NME

'His commentary is one of the best in the biz... From pithy one-liners to hilarious observations on the day's goings on, the 29-year-old is quickly emerging as our favourite star' Mirror

'What's the best thing about Love Island? The drama? The bed-hopping? Actually, many viewers maintain it's the witty voiceovers' Metro

'By far one of the best components of the show is the voiceover guy, Iain Stirling' Heatworld

'The man who always drops the truth bombs and a sassy remark... that person is voiceover genius Iain Stirling' Cosmopolitan

'His Love Island commentary is the stuff of legend.' OK!

'A show with a dark edge but delivered with the utmost skill and affability... Expect this performer to be playing to huge arenas long after Love Island star Marcel Somerville's book has begun gathering dust.' Metro

'An extremely funny hour of observational and surreal comedy' Telegraph

Iain Stirling is a stand-up comedian and BAFTA winning presenter. He is best known as the highly memorable voice of the hit reality show Love Island (ITV2) as well as being the driving force behind the concept of comedy panel show The Dog Ate My Homework (CBBC).

GOR010054882
9780008288013
0008288011
Not F*cking Ready to Adult: A Totally Ill-informed Guide to Life by Iain Stirling
Iain Stirling
Used - Very Good
Paperback
HarperCollins Publishers
2019-05-30
320
N/A
Book picture is for illustrative purposes only, actual binding, cover or edition may vary.
This is a used book - there is no escaping the fact it has been read by someone else and it will show signs of wear and previous use. Overall we expect it to be in very good condition, but if you are not entirely satisfied please get in touch with us
Trustpilot