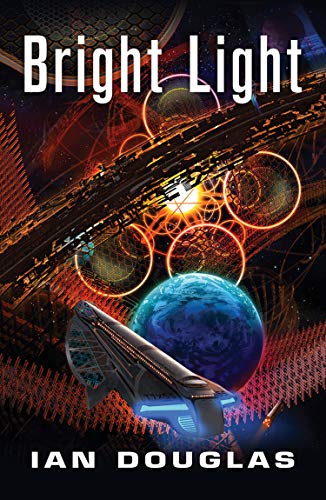 Trevor Gray has been stripped of his command of the starship America, and is unsure what to do with his life. Having dedicated so much of himself to the service, he knew following the super-AI Konstantin's advice could have severe consequences. He just never thought he would be out of the fight.

Because that's what Earth is in: a fight against a sinister alien force so technologically advanced that there seems little hope. That's why he disobeyed his orders in the first place - to figure out a way to stop them. But now he's beached.

Which is just what Konstantin wanted.

For the super-AI has a plan: connect Gray with the Pan-Europeans, and set him on a course to the remote star Deneb. There, he is to make contact with a mysterious alien civilization using the new artificial intelligence Bright Light, and maybe-if they can make it in time-prevent humanity from being wiped from the universe.

`The action is full-blooded and almost non stop, yet the well-developed background is surprisingly rich and logical ... As immersive as it is impressive'
Kirkus (Starred Review)

Ian Douglas is the author of the popular military SF series The Heritage Trilogy, The Legacy Trilogy, and The Inheritance Trilogy. A former naval corpsman, he lives in Pennsylvania.

GOR009711207
Bright Light (Star Carrier, Book 8) by Ian Douglas
Ian Douglas
Star Carrier
Used - Good
Paperback
HarperCollins Publishers
2018-11-29
384
0008121125
9780008121129
N/A
Book picture is for illustrative purposes only, actual binding, cover or edition may vary.
The book has been read but remains in clean condition. All pages are intact and the cover is intact. Some minor wear to the spine.