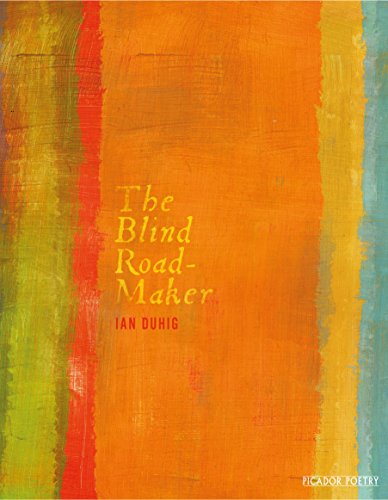 The Blind Roadmaker
by Ian Duhig

The Blind Roadmaker by Ian Duhig

If the starting point for a number of poems in Ian Duhig's richly varied new collection is Sterne's Tristram Shandy, its presiding genius is the great eighteenth-century civil engineer, fiddler and polymath Blind Jack Metcalf - whose life Duhig here celebrates, and from whose example he draws great inspiration. Writing with an almost Burnsian eclecticism, Duhig explores urban poverty, determinism, social justice and the consolations of poetry and music on a journey that takes in everything from a riotous reimagining of Don Juan to the tragedy of Manuel Bravo (the Leeds asylum seeker from Angola who was forced to defend himself in court, and later took his own life). No poet today writes with such a sense of political and social conscience, and The Blind Roadmaker affirms Duhig's belief in poetry as a means of commemorating those who least deserve to be forgotten.

An undoubtedly stimulating, thoroughly entertaining collection. . .one of Duhig's charms is that, for all his learning, he retains humility -- Kathryn Gray * Magma Review *
Ian is a one-off, a true original. In The Blind Roadmaker he charts the journeys of 18th century blind Jack Metcalf who learned to read by feeling headstones faces as well as those of today's dispossessed with a hat's off empathy, wit and intelligence -- Jackie Kay * Herald *

Ian Duhig worked with homeless people for fifteen years before devoting himself to writing activities full-time. He has won the Forward Best Poem Prize once and the National Poetry Competition twice. His last two books with Picador, The Lammas Hireling (2003) and The Speed of Dark (2007), were both PBS Choices and shortlisted for the T. S. Eliot Prize. His most recent short story appeared in The New Uncanny, winner of the Shirley Jackson Best Anthology Award for 2008, and his most recent musical collaboration, with the Clerks early music consort, on their CD Don't Talk - just listen! (Signum, 2009). He lives in Leeds with his wife Jane and their son Owen.

GOR007375227
The Blind Roadmaker by Ian Duhig
Ian Duhig
Used - Very Good
Paperback
Pan Macmillan
2016-02-11
80
1509809813
9781509809813
Short-listed for Roehampton Poetry Prize 2016 (UK) Short-listed for T. S. Eliot Prize 2017 (UK) Short-listed for Forward Prize for Poetry Best Collection 2016 (UK)
Book picture is for illustrative purposes only, actual binding, cover or edition may vary.
This is a used book - there is no escaping the fact it has been read by someone else and it will show signs of wear and previous use. Overall we expect it to be in very good condition, but if you are not entirely satisfied please get in touch with us.