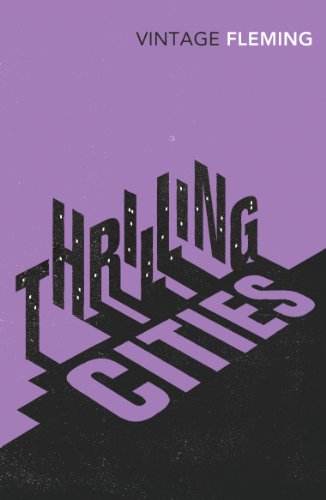 On November 2nd armed with a sheaf of visas...one suitcase...and my typewriter, I left humdrum London for the thrilling cities of the world...

In 1959, Ian Fleming, the creator of James Bond, was commissioned by the Sunday Times to explore fourteen of the world's most exotic cities.

On November 2nd armed with a sheaf of visas...one suitcase...and my typewriter, I left humdrum London for the thrilling cities of the world...

In 1959, Ian Fleming, the creator of James Bond, was commissioned by the Sunday Times to explore fourteen of the world's most exotic cities. Fleming saw it all with a thriller writer's eye. From Hong Kong to Honolulu, New York to Naples, he left the bright main streets for the back alleys, abandoning tourist sites in favour of underground haunts, and mingling with celebrities, gangsters and geishas. The result is a series of vivid snapshots of a mysterious, vanished world.

An accomplished travel writer * Scotsman *
He gathered material for his novels like a voracious travelling magpie: the people and places Fleming experienced on his Thrilling Cities tour in 1959 would [furnish] much of the backdrop and research for the five Bond novels and seven short stories that would follow * The Times *
Fleming was a fine travel writer, too (check out Thrilling Cities), and we quickly come to know and appreciate the locales in the book as we do the characters * Daily Telegraph *
Fleming describes food precisely and enticingly * Independent *
[Fleming's] penchant for fast cars, stylish hotels, expensive alcohol and bizarre encounters brings a whiff of excitement to the narrative, which is vivid, shocking and exuberant by turns * Good Book Guide *

Ian Lancaster Fleming was born in London on 28 May 1908 and was educated at Eton College before spending a formative period studying languages in Europe. His first job was with Reuters news agency, followed by a brief spell as a stockbroker. On the outbreak of the Second World War he was appointed assistant to the Director of Naval Intelligence, Admiral Godfrey, where he played a key part in British and Allied espionage operations.
After the war he joined Kemsley Newspapers as Foreign Manager of the Sunday Times, running a network of correspondents who were intimately involved in the Cold War. His first novel, Casino Royale, was published in 1953 and introduced James Bond, Special Agent 007, to the world. The first print run sold out within a month. Following this initial success, he published a Bond title every year until his death. His own travels, interests and wartime experience gave authority to everything he wrote. Raymond Chandler hailed him as 'the most forceful and driving writer of thrillers in England.' The fifth title, From Russia with Love, was particularly well received and sales soared when President Kennedy named it as one of his favourite books. The Bond novels have sold more than sixty million copies and inspired a hugely successful film franchise which began in 1962 with the release of Dr No starring Sean Connery as 007.
The Bond books were written in Jamaica, a country Fleming fell in love with during the war and where he built a house, 'Goldeneye'. He married Anne Rothermere in 1952. His story about a magical car, written in 1961 for their only child Caspar, went on to become the well-loved novel and film, Chitty Chitty Bang Bang.
Fleming died of heart failure on 12 August 1964, aged fifty-six.
www.ianfleming.com

GOR005318715
Thrilling Cities by Ian Fleming
Ian Fleming
Used - Very Good
Paperback
Vintage Publishing
2013-04-04
304
0099578182
9780099578185
N/A
Book picture is for illustrative purposes only, actual binding, cover or edition may vary.
This is a used book - there is no escaping the fact it has been read by someone else and it will show signs of wear and previous use. Overall we expect it to be in very good condition, but if you are not entirely satisfied please get in touch with us.