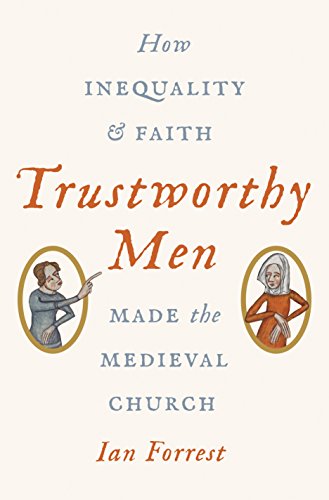 Trustworthy Men: How Inequality and Faith Made the Medieval Church by Ian Forrest

The medieval church was founded on and governed by concepts of faith and trust--but not in the way that is popularly assumed. Offering a radical new interpretation of the institutional church and its social consequences in England, Ian Forrest argues that between 1200 and 1500 the ability of bishops to govern depended on the cooperation of local people known as trustworthy men and shows how the combination of inequality and faith helped make the medieval church.

Trustworthy men (in Latin, viri fidedigni) were jurors, informants, and witnesses who represented their parishes when bishops needed local knowledge or reliable collaborators. Their importance in church courts, at inquests, and during visitations grew enormously between the thirteenth and fifteenth centuries. The church had to trust these men, and this trust rested on the complex and deep-rooted cultures of faith that underpinned promises and obligations, personal reputation and identity, and belief in God. But trust also had a dark side. For the church to discriminate between the trustworthy and untrustworthy was not to identify the most honest Christians but to find people whose status ensured their word would not be contradicted. This meant men rather than women, and-usually-the wealthier tenants and property holders in each parish.

Trustworthy Men illustrates the ways in which the English church relied on and deepened inequalities within late medieval society, and how trust and faith were manipulated for political ends.

"[A] riveting social history full of vivid characters in everyday wrangles and powerful reflections on trust and faith."---Teresa Morgan, The Tablet
"One of The Tablet's Best Books of 2018"
"Trustworthy Men presents a captivating portrait. . . . [It] opens a window onto a fascinating aspect of medieval life, and the study is a model for scholarship across specializations."---G.E. Myers, Choice

Ian Forrest is fellow and tutor in history at Oriel College, University of Oxford. He is the author of The Detection of Heresy in Late Medieval England.

GOR010796120
Trustworthy Men: How Inequality and Faith Made the Medieval Church by Ian Forrest
Ian Forrest
Used - Like New
Hardback
Princeton University Press
2018-07-03
520
0691180601
9780691180601
N/A
Book picture is for illustrative purposes only, actual binding, cover or edition may vary.
The book has been read, but looks new. The book cover has no visible wear, and the dust jacket is included if applicable. No missing or damaged pages, no tears, possible very minimal creasing, no underlining or highlighting of text, and no writing in the margins.