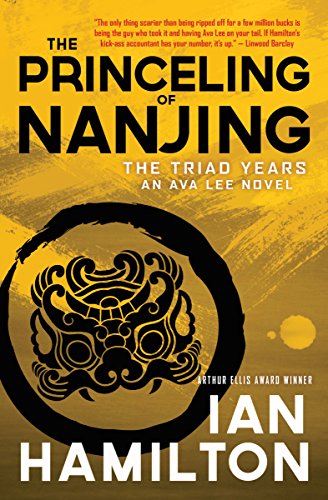 The Princeling of Nanjing by Ian Hamilton

The Princeling of Nanjing: An Ava Lee Novel: Book 8 by Ian Hamilton

The eighth novel in the Ava Lee series finds Ava caught in a labyrinth of high-level political corruption.

Ava is in Shanghai for the launch of the POE clothing line. She has invited Xu, and over the course of the glitzy event and a late-night dinner, she detects a certain hesitancy in him. He later confides that the Tsai family, headed by Tsai Lian, the governor of Jiangsu Province and a princeling - he is the son of a general who was on the Long March with Mao and a member of China's power elite - is trying to force him and his triad organization back into the drug business. Xu is already paying millions of dollars a year to various Tsai businesses, but the family wants more and thinks the new venture can deliver it. Xu believes this move would lead to his eventual destruction and feels he has nowhere to turn. If he opposes them, they will crush him. If he goes along with them, he thinks that inevitably the police and military will hunt him down.

Ava sets out to help Xu deter the Tsai family. As she digs into the breadth and depth of the family's wealth and corruption, she gets caught up in a huge tangled web, extending all the way to the U.S. and the U.K., where it reaches the top echelons of political power.

Praise for The King of Shanghai:

Good fun, too, for those who like to combine crime fiction with armchair traveling. Booklist

Praise for the Ava Lee series and Ian Hamilton:

Whip smart, kick-butt heroine, mixed into a perfect combination of adventure and exotic location. Can't wait to see where Ava is off to next. Taylor Stevens, author of the Vanessa Michael Monroe Series

The only thing scarier than being ripped off for a few million bucks is being the guy who took it and having Ava Lee on your tail. If Hamilton's kick-ass accountant has your number, it's up. Linwood Barclay

A heck of a fun series, sharing Ian Fleming's penchant for intrigue and affinity for the finer things in life and featuring Ava Lee a remarkable hero, a twenty-first century James Bond with real depth beneath her tough-as-nails exterior. Five stars and first class! Owen Laukkanen, author of The Professionals

Ava Lee, that wily, wonderful hunter of nasty business brutes, is back in her best adventure ever . . . if you haven't yet discovered Ava Lee, start here. Globe and Mail

Crackling with suspense, intrigue, and danger, your fingers will be smoking from turning these pages. Don't ever, ever, mess with Ava Lee. She's not your average accountant. Terry Fallis, author of The Best Laid Plans

the reader is offered plenty of Ava in full flower as the Chinese-Canadian glamour puss who happens to be gay, whip smart and unafraid of whatever dangers come her way.

...like the best series writers - Ian Rankin and Peter Robinson come to mind - Hamilton manages to...keep the Ava Lee books fresh...a compulsive read, a page-turner of the old school...The Princeling of Nanjing is a welcome return of an old favourite, and bodes well for future books./p>Quill and Quire

London Free Press
NPB9781487001605
9781487001605
1487001606
The Princeling of Nanjing: An Ava Lee Novel: Book 8 by Ian Hamilton
Ian Hamilton
The Ava Lee Novels
New
Paperback
House of Anansi Press Ltd ,Canada
20170525
496
N/A
Book picture is for illustrative purposes only, actual binding, cover or edition may vary.
This is a new book - be the first to read this copy. With untouched pages and a perfect binding, your brand new copy is ready to be opened for the first time
Trustpilot