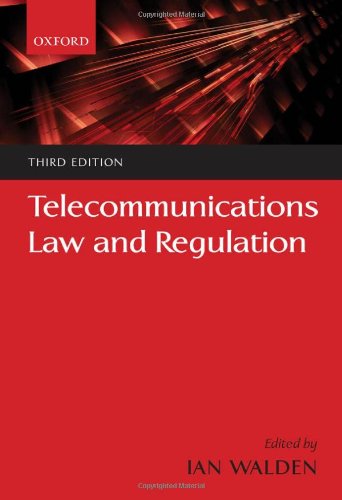 Used Price
$119.99
inc. GST
Free Shipping in Australia
This new edition is fully up to date, offering comprehensive coverage of the law and regulation relating to telecommunications. It contains new chapters on technology and markets, and capacity agreements. Written by leading experts, it is essential reading for legal practitioners and academics involved in the communications industry.
Reviews:
Trustpilot
Very Good

Since the last edition of the book was published, there have been a number of important developments in the telecommunications industry, for example the operational separation of BT in the UK, which may prove a model for the rest of Europe in dealing with incumbent operators, and the debate over "network neutrality" in the US, which is dominating the roll-out of the infrastructure. Telecommunications Law and Regulation is fully updated and contains new chapters on technology and markets, and capacity agreements. Other topics addressed in this new edition include the consequences of convergence within an EU and international context, including the blurring of conduit and content regulations; the implications of IP and Next Generation Networks; issues of communication privacy in the context of the "war on terrorism", and how these impact on the commercial operations of service providers; the obtaining and trading of spectrum, with governments and regulators looking to fully exploit the"digital dividend"; and the application of ex post competition law to the sector, as governments attempt to deregulate competitive markets. The book examines all aspects of EU 2003 regime; implementation issues, and the proposed reforms arising from the 2006 review. Written by leading experts in the field, it offers comprehensive coverage of the law and regulatory structures relating to telecommunications. It is essential reading for legal practitioners involved in the communications industry and of interest to management consultants, bankers and accountants who will need to be aware of the legal implications of this fast changing area. It is also a highly accessible and thought-provoking book for postgraduate study.

Dr Ian Walden is Professor of Information and Communications Law and head of the Institute of Computer and Communications Law in the Centre for Commercial Law Studies, Queen Mary, University of London. His publications include EDI and the Law (1989), Information Technology and the Law (1990), EDI Audit and Control (1993), Cross-border Electronic Banking (1995, 2000), Telecommunications Law Handbook (1997), E-Commerce Law and Practice in Europe (2001), Telecommunications Law and Regulation (2001, 2005, 2009), Computer Crimes and Digital Investigations (2007) and Media Law and Practice (forthcoming 2009). Ian has been involved in law reform projects for the World Bank, the European Commission, UNCTAD, UNECE and the European Bank of Reconstruction and Development, as well as for a number of individual states. Ian has held visiting positions at the Universities of Texas and Melbourne. Ian is a solicitor and is Of Counsel to the global law firm Baker & McKenzie (www.bakernet.com) and is a Trustee and Vice-Chair of the Internet Watch Foundation (www.iwf.org.uk).

GOR005891284
Telecommunications Law and Regulation by Ian Walden
Ian Walden
Used - Very Good
Paperback
Oxford University Press
2009-02-19
976
019955935X
9780199559350
N/A
Book picture is for illustrative purposes only, actual binding, cover or edition may vary.
This is a used book - there is no escaping the fact it has been read by someone else and it will show signs of wear and previous use. Overall we expect it to be in very good condition, but if you are not entirely satisfied please get in touch with us.