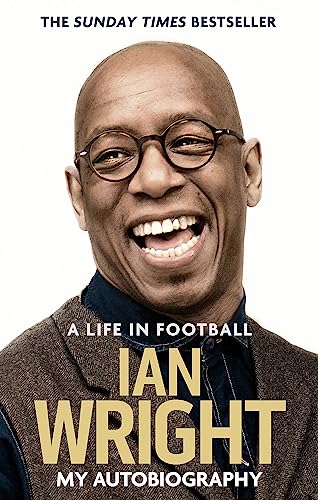 A Life in Football: My Autobiography
by Ian Wright

In Stock
$17.49
inc. GST
The autobiography of Arsenal legend, England striker and TV pundit extraordinaire, Ian Wright, one of the biggest sports stars of his generation.
Very Good Well Read
5 in stock

A Life in Football: My Autobiography Summary

A Life in Football: My Autobiography by Ian Wright

Ian Wright, Arsenal legend, England striker and TV pundit extraordinaire, is one of the most interesting and relevant figures in modern football.

His journey from a South London council estate to national treasure is everybody's dream. From Sunday morning football directly to Crystal Palace; from 'boring, boring Arsenal' to inside the Wenger Revolution; from Saturday afternoons on the pitch to Saturday evenings on primetime television; from a week in prison to inspiring youth offenders, Ian will reveal all about his extraordinary life and career.

Ian will also frankly discuss how retirement affects footballers, why George Graham deserves a statue, social media, why music matters, breaking Arsenal's goal-scoring record, racism, the unadulterated joy of playing alongside Dennis Bergkamp and, of course, what he thinks of Tottenham.

Not a standard footballer's autobiography, Ian Wright's memoir is a thoughtful and gripping insight into a Highbury Hero and one of the greatest sports stars of recent years.

A Life in Football: My Autobiography Reviews

Ian Wright, MBE, is an English former professional footballer, turned television and radio personality. Wright enjoyed success with London clubs Crystal Palace and Arsenal, as well as earning 33 caps for the English national team. He also played in the English and Scottish Premier Leagues for West Ham United and Celtic and the Football League for Burnley and Nottingham Forest.

GOR008419357
A Life in Football: My Autobiography by Ian Wright
Ian Wright
Used - Very Good
Paperback
Little, Brown Book Group
2017-06-01
384
1472123603
9781472123602
N/A
Book picture is for illustrative purposes only, actual binding, cover or edition may vary.
This is a used book - there is no escaping the fact it has been read by someone else and it will show signs of wear and previous use. Overall we expect it to be in very good condition, but if you are not entirely satisfied please get in touch with us.