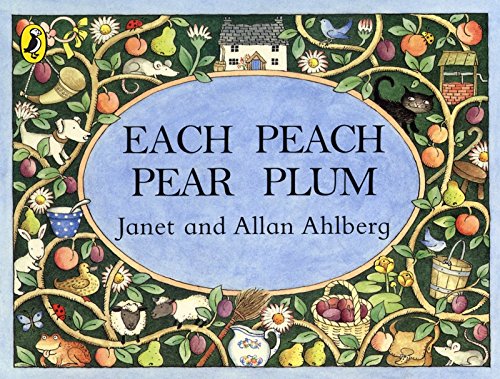 Each Peach Pear Plum
by Illustrated by Janet Ahlberg

In Stock
$17.49
inc. GST
Offers illustrated pages that encourages young children to interact with the picture to find the next fairy tale and nursery rhyme character.
Very Good Good Well Read
57 in stock

Each Peach Pear Plum by Illustrated by Janet Ahlberg

Each Peach Pear Plum - the classic picture book by Janet and Allan Ahlberg.

Each Peach Pear Plum is a timeless picture book classic from the bestselling illustrator/author team Janet and Allan Ahlberg, creators of Peepo!. Each beautifully illustrated page encourages young children to interact with the picture to find the next fairy tale and nursery rhyme character.

In this book
With your little eye,
Take a look,
And play 'I spy'

Praise for Each Peach Pear Plum:

'Deceptively simple. Each Peach Pear Plum is a work of genius' Elaine Moss

'This familiar rhyme has been given the brilliant Ahlbreg treatment to which no young child can fail to respond. It's a book which will be read over and over again . . . just perfect!' Child Education

Allan Ahlberg has published over 100 children's books and with his late wife Janet, created many award-winning children's picture books. The Baby's Catalogue was inspired by their daughter, Jessica. The Ahlbergs' books are nursery bookshelf standards and have been the recipient of worldwide acclaim and awards, including the Kate Greenaway Medal.

Look out for these other classics by Allan Ahlberg:

Burglar Bill; Cops and Robbers; The Baby's Catalogue; The One and Only Two Heads; Son of a Gun; The Little Worm Book; Two Wheels Two Heads; Funny Bones; A Pair of Sinners; Happy Families; Peepo!; The Ha Ha Bonk Book; Help Your Child to Read; Ten in a Bed; Please mrs Butler; Daisy Chains; Yum Yum; Playmates; Foldaways; Woof; The Cinderella Show; The Jolly Postman; The Jolly Christmas Postman; The Jolly Pocket Postman; The Clothes Horse and Other Stories; The Mighty Slide; Starting School; Heard it in the Playground; The Bear Nobody Wanted; It was a Dark and Stormy Night; The Giant Baby; Baby Sleeps; Blue Buggy; Doll and Teddy; See the Rabbit; Please Mrs Butler; The Better Brown Stories; The Boyhood of Burglar Bill

About Illustrated by Janet Ahlberg

Janet and Allan Ahlberg created some of the world's most popular picture books, including EACH PEACH PEAR PLUM and THE JOLLY CHRISTMAS POSTMAN, both winners of Greenaway Medals, and THE BABY'S CATALOGUE, inspired by their daughter Jessica. Janet died in 1994 and Allan, a former teacher, now lives in London.

GOR000556279
Each Peach Pear Plum by Illustrated by Janet Ahlberg
Illustrated by Janet Ahlberg
Used - Very Good
Paperback
Penguin Books Ltd
1989-03-13
32
0140509194
9780140509199
N/A
Book picture is for illustrative purposes only, actual binding, cover or edition may vary.
This is a used book - there is no escaping the fact it has been read by someone else and it will show signs of wear and previous use. Overall we expect it to be in very good condition, but if you are not entirely satisfied please get in touch with us.