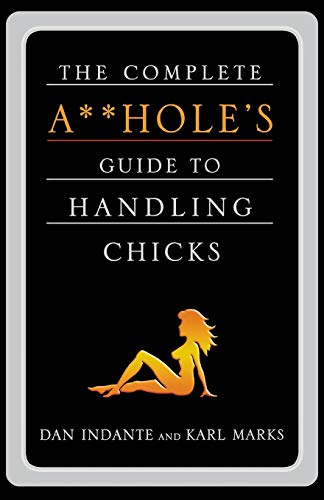 The Complete a**Hole's Guide to Handling Chicks
by Dan Indante

In Stock
$12.49
+10% GST
This sadistic, hysterical relationship book outlines how women can be manipulated, frustrated, and ultimately dominated throughout the course of a man's life.
Very Good
7 in stock

The Complete a**Hole's Guide to Handling Chicks by Dan Indante

A humorous guide for men on relationships with women covers a man's life from birth through high school, college, marriage, divorce, to death.

As an attorney, Dan Indante has spent the last 10 years representing talentless writers and entertainers whom he secretly despises. As a human being, he has spent the last 34 years dating heartless, soulless women whom he much more openly despises. Rather than becoming a serial killer, he channeled his rage and bitterness into writing books about the evil inherent in all breast-endowed creatures (except his wife). His parents are bursting with pride that, after spending over $100,000 for his UC Berkeley and Loyola Law School education, they can now boast that their son is the world's foremost a**hole.

Karl Marks is a regular performer in the West Coast comedy circuit, headlining at clubs such as the Improv, Friars Club, and Icehouse. Using the stage as his soapbox, he has successfully offended thousands of hateful women to the raucous applause of drunken men. His material spawns from both time spent at the U. of Southern California, where he double majored in public intoxication and freshman sorority girls, and his many years navigating the thankless, Godforsaken prostitution ring better know as the Los Angeles dating scene. His mother and three sisters should be proud.

GOR002810250
The Complete a**Hole's Guide to Handling Chicks by Dan Indante
Dan Indante
Used - Very Good
Paperback
Griffin Publishing
2003-05-01
269
0312310846
9780312310844
N/A
Book picture is for illustrative purposes only, actual binding, cover or edition may vary.
This is a used book - there is no escaping the fact it has been read by someone else and it will show signs of wear and previous use. Overall we expect it to be in very good condition, but if you are not entirely satisfied please get in touch with us.