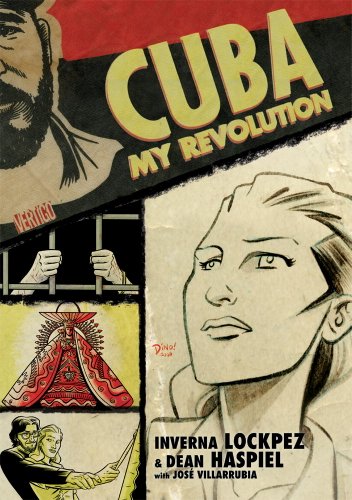 Written by INVERNA LOCKPEZ Art by DEAN HASPIEL Cover by DEAN HASPIEL From the moment Fidel Castro captures Havana in 1959, 17-year-old Sonya believes in the promise of the Cuban Revolution. A medical student who dreams of becoming a painter, she joins the militia and finds herself caught between idealism and ideology. As a volunteer medic at the Bay of Pigs, she's imprisoned and tortured by her own comrades. Physically and emotionally scarred upon returning home, Sonya searches for fulfillment in art. But when she realizes that none of her efforts, by gun or brush, fall in line with Castro's regime, Sonya must make agonizing choices between her family, her lover and her beloved country. This graphic novel is inspired by the true experiences of first-time author and Havana-born artist Inverna Lockpez, with stunning art by the Eisner-nominated Dean Haspiel (THE ALCOHOLIC, THE QUITTER, AMERICAN SPLENDOR) in a lush red-and-black palette created by colorist Jose Villarrubia. On sale SEPTEMBER 8 144 pg, Two colors, $24.99 US MATURE READERS

Inverna Lockpez is a Havana-born artist and curator who left Cuba in the late 1960s. Upon settling in theU.S., she became involved in political art movements including the pioneering feminist exhibition x12 and theanti-Vietnam War People s Flag Show. Her painting and sculpture has exhibited in over 80 venues, includingthe winning design of a major public art competition in New York City. Under her directorship, the INTARGallery was cited as one of the best 15 galleries for seven years running by Art in America. A two-timerecipient of grants from The National Endowment for the Arts, Lockpez lives in New York and Florida.

Dean Haspiel is the creator of the Eisner Award-nominated "Billy Dogma "and the webcomics collectiveACT-I-VATE. He has drawn comics for "The New York Times," DC/Vertigo, Marvel Comics, Dark Horse, Scholasticand Toon Books among others. He is best known for his collaborations with Harvey Pekar on THE QUITTERand with Jonathan Ames on THE ALCOHOLIC and the HBO series "Bored to Death." He lives in Brooklyn."

GOR010741672
Cuba by Inverna Lockpez
Inverna Lockpez
Used - Like New
Hardback
DC Comics
2010-09-08
144
140122217X
9781401222178
N/A
Book picture is for illustrative purposes only, actual binding, cover or edition may vary.
The book has been read, but looks new. The book cover has no visible wear, and the dust jacket is included if applicable. No missing or damaged pages, no tears, possible very minimal creasing, no underlining or highlighting of text, and no writing in the margins.