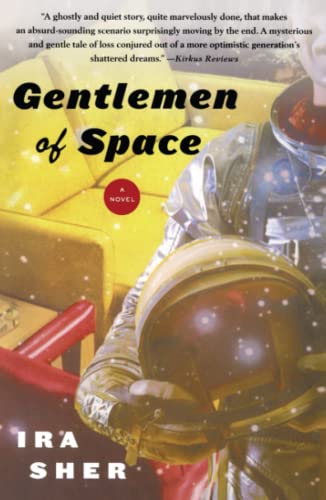 Gentlemen of Space
by Ira Sher

Gentlemen of Space by Ira Sher

Magnolia Court is not the most magical place in Florida, but to Georgie Finch, his suburban development is the center of the universe. In this superbly crafted novel, Georgie tells us the story of how his neighborhood and his family change in 1976 when his father, Jerry, wins a contest to become the first civilian man on the moon.
Once Jerry is shot into space, Magnolia Court turns into the worst sort of American media circus, and Georgie finds himself navigating through star-struck admirers and their card tables, Winnebagos, cookouts, and telescopes. When Jerry goes missing, the camp turns into a vigil, punctuated by potluck suppers and banners. Eventually the astronauts return to Earth without Jerry and descend on Magnolia Court -- in their spacesuits -- to pay their respects. All the while Georgie gets phone calls from his father in space, but no one believes him. Should we? Or is Georgie's entire story just that, a story?
A feat of literary ventriloquism, Gentlemen of Space is surprising, captivating, and astronomically inventive.

Kirkus Reviews A ghostly and quiet story, quite marvelously done, that makes an absurd-sounding scenario surprisingly moving by the end. A mysterious and gentle tale of loss conjured out of a more optimistic generation's shattered dreams.
Book magazine Sher's debut novel, which recalls the twilight of the golden age of American space exploration, is beguiling, strange, and ultimately beautiful.
The San Diego Union-Tribune With writing this adroit and bursting with supernovas of wisdom, ambitionwise, Sher's debut rivals that of Neil Armstrong.
Publishers Weekly An original, haunting...whimsical, elegiac...novel.

GOR010389151
Gentlemen of Space by Ira Sher
Ira Sher
Used - Very Good
Paperback
Simon & Schuster
2004-05-17
291
074324219X
9780743242196
N/A
Book picture is for illustrative purposes only, actual binding, cover or edition may vary.
This is a used book - there is no escaping the fact it has been read by someone else and it will show signs of wear and previous use. Overall we expect it to be in very good condition, but if you are not entirely satisfied please get in touch with us.