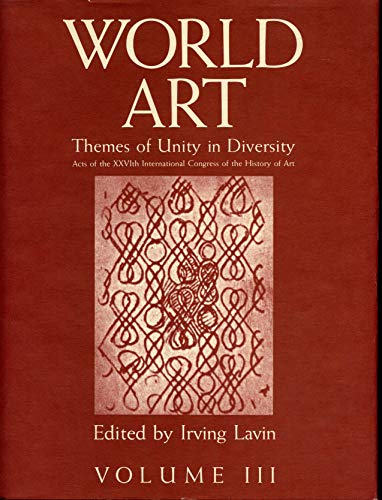 In Stock
$158.99
inc. GST
The XXVIth Congress encompassed the history of art from all periods and places, and the seven sessions included in these volumes deal with the broad themes that transcend cultural differences and are perceptible through the discipline of art history.
Good
Only 1 left

World Art: Themes of Unity in Diversity. Acts of the XXVIth International Congress of the History of Art. 3 Vols. by Irving Lavin

Under the sponsorship of the Comite International d'Histoire de l'Art (CIHA), scholars from 31 countries met in August in Washington, DC, to present papers and discuss the subject of the Congress. The CIHA was created by a group of scholars meeting in Vienna in 1873 to exchange results of research, discuss aspects of the theory of the history of art, and encourage international discourse. CIHA has since sponsored congresses at intervals of three or five years.

Until now CIHA focused on European art from Constantine to the present, whereas the XXXVIth Congress, in a critical shift, encompassed the history of art from all periods and places. The seven sessions deal with broad themes that transcend cultural differences and are uniquely perceptible through the discipline of art history. Center and Periphery: Dissemination and Assimilation of Style examines the processes whereby local styles may be formed by "dissemination" from a dominant cultural center and, conversely, those which form a cosmopolitan style by the "assimilation" of disparate local tradition. Conceptual Designs: Diagrams and Geometric Patterns discusses form and meaning in diagrams and geometric patterns used as independent compositions or as "incidental" ornament. The Written Word in Art and as Art explores the relationship between what is written and how it is written, and the contribution of both to an understanding of the work as a whole. The Artist is concerned with significant developments in the history of the artist's self-consciousness. Art and Ritual examines the contribution of the study of ritual to an understanding of the form and meaning of a work of art, and vice versa. Art and National Identity in the Americas looks at the problems of regional and national self-definition in the art of North, Central, and South America, from the European conquests to the present. Preserving the World Art discusses the history and theory of conservation and restoration of works of art and their settings.

Each session was chaired and its program determined by two distinguished scholars from widely divergent fiends, ensuring a broad and varied approach to the subject. Following introductory essays by the Chairs, the papers represent a selection of the best contribution by art historians as well as scholars in other disciplines. Included as well are plenary addresses by three international leaders in the field, Hermann Fillitz, Andre Chastel, and George Kubler.

Irving Lavin is a Professor at the Institute for Advanced Study at Princeton.

GOR010258770
World Art: Themes of Unity in Diversity. Acts of the XXVIth International Congress of the History of Art. 3 Vols. by Irving Lavin
Irving Lavin
Used - Good
Hardback
Pennsylvania State University Press
1990-10-01
900
0271006072
9780271006079
N/A
Book picture is for illustrative purposes only, actual binding, cover or edition may vary.
The book has been read but remains in clean condition. All pages are intact and the cover is intact. Some minor wear to the spine.