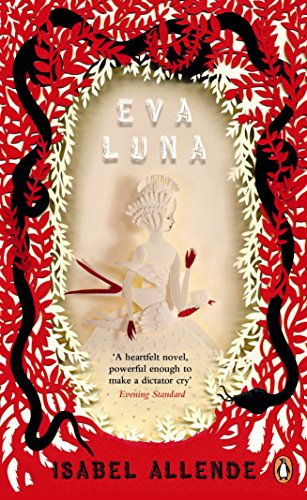 Used Price
$17.49
inc. GST
Free Shipping in Australia
Tells the story of an orphan who beguiles the world with her astonishing visions, triumphing over the worst of adversity and bringing light to a dark place.
Reviews:
Trustpilot
Very Good Good

'My name is Eva, which means "life", according to a book of names my mother consulted. I was born in the back room of a shadowy house, and grew up amidst ancient furniture, books in Latin, and human mummies, but none of those things made me melancholy, because I came into the world with a breath of the jungle in my memory.'

Isabel Allende tells the sweet and sinister story of an orphan who beguiles the world with her astonishing visions, triumphing over the worst of adversity and bringing light to a dark place.

A heartfelt novel, powerful enough to make a dictator cry * Evening Standard *
She can spin a tale out of a pebble and a piece of string ... the atmosphere of encroaching doom, buried treasure and broken hearts is never tragic because there is a continual sense of life's endless opulence * Independent *
Packed with action, prodigal in invention, vivid in description and metaphor, this cleverly plotted novel is enhanced by its flowing prose and absolute assurance * The Times *
Allende's world is both sweet and sinister, and the flamboyance and power of her vision can seduce the sourest and most literal-minded reader * Daily Telegraph *

Isabel Allende was born in Lima, Peru, in 1942 and moved to Chile as a child. She was a journalist for many years before publishing her first novel, The House of the Spirits in 1982. She is the author of eight novels, including Ines of My Soul, Daughter of Fortune, and Portrait in Sepia. She has also written a collection of stories, four memoirs, and a trilogy of children's novels. Her books have been translated into more than twenty-seven languages and have become bestsellers across four continents. In 2004 she was inducted into the American Academy of Arts and Letters. Isabel Allende lives in California.

GOR004268958
Eva Luna by Isabel Allende
Isabel Allende
Penguin Essentials
Used - Very Good
Paperback
Penguin Books Ltd
2011-03-31
304
0241951658
9780241951651
N/A
Book picture is for illustrative purposes only, actual binding, cover or edition may vary.
This is a used book - there is no escaping the fact it has been read by someone else and it will show signs of wear and previous use. Overall we expect it to be in very good condition, but if you are not entirely satisfied please get in touch with us.