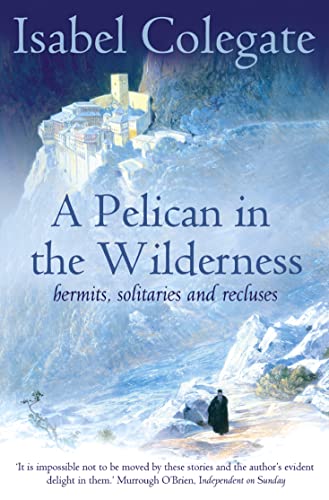 A Pelican in the Wilderness
by Isabel Colegate

A man that studies Happiness must sit alone like a Sparrow upon the House Top, and like a Pelican in the Wilderness' - Thomas Traherne. Celebrated novelist Isabel Colegate explores the lives and works of those who've followed the call of solitude, from Lao Tzu and the Desert Fathers to Wordsworth and Thoreau.

A Pelican in the Wilderness Summary

A Pelican in the Wilderness: Hermits, Solitaries and Recluses by Isabel Colegate

Celebrated novelist Isabel Colegate explores the lives and works of those who have followed the call of solitude, from Lao Tzu and the Desert Fathers to Wordsworth and Thoreau. "A Pelican in the Wilderness" casts through time and place to uncover tales of human solitude. The quest for solitude - whether for social, religious, personal or intellectual reasons - dates back to ancient times. As a spiritual phenomenon it has its roots in Chinese, Hindu and Western philosophies; from the mystical Desert Fathers - the most famous of which was St Jerome - who cast themselves out into deserts and wastelands in search of spiritual revelation, to the Celts on Iona and Lindisfarne (who arrived with only onions to live on). Rousseau found solitaries inspirational, but declared that he would die of boredom if he had to become a hermit himself (a view possibly shared by St Jerome who only managed to stay in the desert for two years). Hermits and hermitages even used to be a feature of rural and urban England. Sir John Soane had a hermit's cell installed in his house in Lincolns' Inn. At Hawkstone in Shropshire in the 1780s it was reported that a live hermit was seen gazing at a human skull. And in the 18th-century it was seen as highly fashionable to place a hermitage in landscaped gardens; an advert would then be placed for a hermit, specifying particular requirements such as a promise not to cut hair, nails or beard. In return the hermit would receive food and a small gratuity. One hermit in Painshill, Surrey was sacked for drinking beer in the village inn. But of course, recluses, solitaries, hermits, anchoresses (female solitaries) and "loners" continue to exist to this day, quietly opting to live outside society or living in complete seclusion in wildernesses. Isabel Colegate examines their lives, motivations, self-reflections, writings and the thoughts of present-day urban and rural hermits.

A Pelican in the Wilderness Reviews

Radio 4 Book of the Week

Isabel Colegate is the author of many bestselling books including THE ORLANDO TRILOGY, AGATHA, A GLIMPSE OF SION'S GLORY, WINTER JOURNEY and THE SHOOTING PARTY. She reviews both fiction and non-fiction for the Daily Telegraph, TLS, the Spectator, Washington Post, New York Times as well as writing travel articles for the Independent, Daily Telegraph and the Daily Mail. She has appeared on a number of radio and television programmes. She was made a Fellow of the Royal Society of Literature in 1981and given an honorary degree by the University of Bath in 1988.

GOR000961838
A Pelican in the Wilderness: Hermits, Solitaries and Recluses by Isabel Colegate
Isabel Colegate
Used - Very Good
Paperback
HarperCollins Publishers
2003-02-17
320
0006531881
9780006531883
N/A
Book picture is for illustrative purposes only, actual binding, cover or edition may vary.
This is a used book - there is no escaping the fact it has been read by someone else and it will show signs of wear and previous use. Overall we expect it to be in very good condition, but if you are not entirely satisfied please get in touch with us.