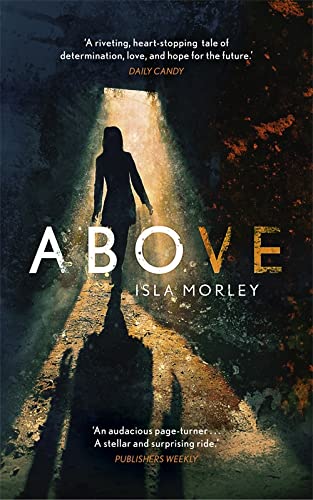 Blythe, a sixteen-year-old Kansas schoolgirl is abducted and kept in an abandoned silo by a survivalist, who is convinced that the world is about to end. A chilling novel of survival and hope and heart-stopping plot twists.

NOTHING IS AS IT SEEMS...
Blythe, a sixteen-year-old Kansas schoolgirl is abducted and kept in an abandoned silo by a survivalist, who is
convinced that the world is about to end.
Struggling to survive, crushed by loneliness and the terrifying madness of her captor, Blythe resists the temptation to give up. Nothing, however, prepares her for the burden of having to raise a child in confinement.
Just when Blythe starts to believe that she may be confined to the silo for life, their lives are ambushed by one event that is at once promising and devastating...
THINK YOU KNOW WHAT'S GOING TO HAPPEN? YOU REALLY DON'T...
Riveting and unforgettable, this is a beautifully written and compelling tale of survival, reinvention, and hope.

Thrillers don't come much more claustrophobic that this story of a 16 year old girl who is kidnapped and imprisoned . . . Her struggle to survive makes for an eerily compulsive story, brilliantly imagined and extremely scary * Sunday Mirror *
The central premise of Morley's novel is a stroke of genius * Independent on Sunday *
Combine the terror of Emma Donoghue's Room with the drama of The Hunger Games and you'll get a rough idea of how gripping Above is. Can someone make a film adaptation please? * Cosmopolitan *
If you love Room, why not try Above? A haunting and compelling story. * Woman & Home *
magnetic... We see, we feel, and we cringe at the victim's circumstances * New York Journal of Books *
Above is so much more than a psychological thriller depicting an insane man with an apocalyptic vision. It's ultimately a novel about hope, courage and endurance. It kept me spellbound. -- Ricky Woods * Fair Lady Magazine *
A compelling tale of survival, reinvention, and hope... Vivid and poignant * Boston Globe *
Compelling * Image - May Book of the Month *
By turns funny and heart-breaking, tense, horrific, tender, Above is a beautifully-written examination of life interrupted and the terrors that can be inflicted by the people we believe we can trust. At the centre of the story is the feisty, tomboyish Blythe, but it is much more than just her story. Isla Morley's second novel is an attention-grabbing, twist-filled nightmare pulled straight from the headlines. Perfectly-judged, it quickly gets its hooks into the reader and refuses to let go. Despite the comparisons, you haven't read anything quite like this before.Above is sure to be Isla Morley's breakout novel. Morley herself is destined for great things and is definitely worth watching. * Reader Dad *
This novel also puts one in mind of Cormac McCarthy's The Road and PD James' novel Children of Men in their portrayal of hideous possible realities and pondering the meaning of survival...Morley's novel gives a challenging point of view to this conundrum by creating a thought-provoking and compulsively-readable tale. * Lonesome Reader Blog *
I was sent a proof of this a little while ago. I glanced at the cover, saw the survivalist thing and thought, meh. Then I sat down and started reading. I barely moved for hours. I couldn't put it down. I read it in one sitting...it's more than just a captivity book. There's more to it than survival. So much more. I don't want to say anything else - but it stuck with me, for days. * Live Otherwise Blog *
Above is not an easy book to review. It is, at least it was for me, extremely difficult to put down. It felt as though it insisted on it, demanding my time and almost obsession until I knew what was to happen. As a result, I read it in just a day. There was no way I was going to sleep without knowing how it ended...Before reading Above, I was also a little concerned that it would fall into the Gone Girl category - i.e., a book that trapped me into it, wouldn't let me go until I was finished with it and could throw it across the room. I'm relieved to say that, in my opinion, Above is a far better book... * For Winter Nights Blog *
Morley scores with an audacious page-turner. In a series of gripping twists, Morley elevates the complexities of Blythe and Adam's situation, deepening the themes of survival and dependence... a stellar and surprising ride. * Publishers Weekly *
Morley crafts a menacingly sinister tale of imprisonment and eerily inventive story of survival that will appeal to fans of riveting psychological suspense and cut-throat dystopian fiction. * Booklist *
Quite moving... intriguing and provocative. * Kirkus Reviews *
Reeled out with the chilling calmness of a Hitchcock film, Above haunts as it illuminates. Deftly told, this tale of human resilience in the face of madness is a horror classic for our times. * Lynn Cullen, author of MRS. POE *
Morley is a stunning storyteller. * Daily Beast *
The isolation and darkness wrap you like wild vines and force you to face the nightmare, but Above plunges you forward and drives toward hope, because sometimes that's all that remains. This is a novel that challenges you to believe. * Michael Farris Smith, author of RIVERS *

Isla Morley grew up in South Africa during apartheid. Now in the Los Angeles area, she shares a home with her husband, daughter, a cat, two dogs and four tortoises. Come Sunday, her debut novel, was awarded the Janet Heidinger Prize for Fiction, was a finalist for the Commonwealth Prize and was longlisted for the Sunday Times Literary Award.

GOR011367238
9781444797008
144479700X
Above by Isla Morley
Isla Morley
Used - Like New
Paperback
John Murray Press
20140508
384
null null null null null null null null null null
Book picture is for illustrative purposes only, actual binding, cover or edition may vary.
The book has been read, but looks new. The book cover has no visible wear, and the dust jacket is included if applicable. No missing or damaged pages, no tears, possible very minimal creasing, no underlining or highlighting of text, and no writing in the margins
Trustpilot