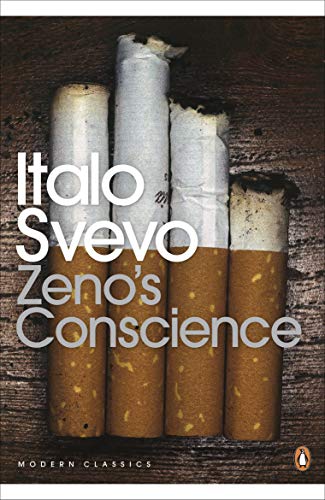 Used Price
$30.99
inc. GST
Free Shipping in Australia
A saga of a family and an account of addiction and failure as its helpless hero, notionally undergoing psychiatric help, manages spectacularly to fail to give up smoking, run his business or make sense of his private life.
Reviews:
Trustpilot
Very Good Good Well Read

This enormously engaging, strange novel is both an engrossing saga of a family and a hilarious account of addiction and failure as its helpless hero, notionally undergoing psychiatric help, manages spectacularly to fail to give up smoking, run his business or make sense of his private life.

A hymn to self-delusion and procrastination ZENO'S CONSCIENCE has provoked enormous affection in its readers both in Italian and English since its first publication in the 1920s.

"Svevo's masterpiece . . . Ýin a fresh translation by the dean of Italian literary translators." -"Los Angeles Times" "An excellent new rendering Ýof a marvellous and original book."-James Wood, "London Review of Books" "A masterpiece, a novel overflowing with human truth in all its murkiness, laughter and terror, a book as striking and relevant today as when it was first published, and a book that is in every good way-its originality included-like life." -Claire Messud, "The New Republic""Hilarious. . . . Effortlessly inventive and eerily prescient. . . . William Weaver . . . updates the novelist's idiosyncratic prose with great affection." -"The Atlantic Monthly""An event in modern publishing. For the first time, I believe, in English, we get the true, dark music, the pewter tints, of Svevo's great last novel. . . . ÝSvevo is a master." -Joan Acocella, "The New Yorker""ÝAn exhilarating and utterly original novel. . . . Weaver's version strikes one as excellent." -P. N. Furbank, "Literary Review""One of the great comic novels of the twentieth century. . . . ÝSvevo is perhaps "the "most significant Italian modernist novelist." -"The Times Literary Supplement""ÝA neglected masterpiece. Seventy-five years old, the novel feels entirely modern." -"The Boston Globe""A reason for celebration. . . . If you have never read Svevo, do so as soon as you can. He is beautiful and important." -"New Statesman""One of the indispensable 20th-century novels. . . . A revolutionary book, and arguably (in fact, probably) the finest of all Italian novels." -"Kirkus Reviews""No one has done more to make modern Italian literatureavailable in English than William Weaver. . . . ÝHis new translation is scrupulously accurate." -"Anniston Star"

Italo Svevo (1861-1928) lived most of his life in Trieste, now part of Italy, but then a port of the Austro-Hungarian Empire. ZENO'S CONSCIENCE is his greatest work, seen by James Joyce as one of the century's handful of masterpieces. His other novels include AS A MAN GROWS OLDER and A LIFE.

William Weaver is most famously the translator of Italo Calvino and Umberto Eco.

GOR001619626
Zeno's Conscience by Italo Svevo
Italo Svevo
Penguin Modern Classics
Used - Very Good
Paperback
Penguin Books Ltd
2002-09-26
464
014018774X
9780140187748
N/A
Book picture is for illustrative purposes only, actual binding, cover or edition may vary.
This is a used book - there is no escaping the fact it has been read by someone else and it will show signs of wear and previous use. Overall we expect it to be in very good condition, but if you are not entirely satisfied please get in touch with us.