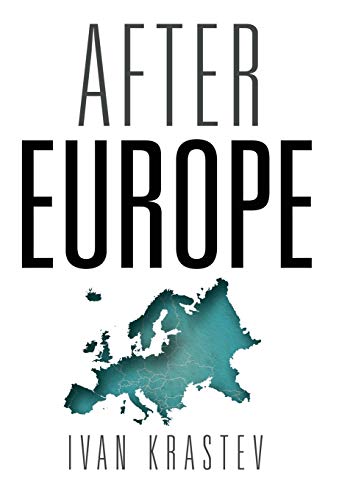 After Europe by Ivan Krastev

After Europe by Ivan Krastev

In this provocative book, renowned public intellectual Ivan Krastev reflects on the future of the European Union-and its potential lack of a future. With far-right nationalist parties on the rise across the continent and the United Kingdom planning for Brexit, the European Union is in disarray and plagued by doubts as never before. Krastev includes chapters devoted to Europe's major problems (especially the political destabilization sparked by the more than 1.3 million migrants from the Middle East, North Africa, and South Asia), the spread of right-wing populism (taking into account the election of Donald Trump in the United States), and the thorny issues facing member states on the eastern flank of the EU (including the threat posed by Vladimir Putin's Russia). He concludes by reflecting on the ominous political, economic, and geopolitical future that would await the continent if the Union itself begins to disintegrate.

Ivan Krastev's elegant and insightful volume establishes him as the most brilliant and iconoclastic thinker on Europe's future. This short aphoristic volume turns many of the established ways of looking at Europe on their head, bringing added depth to discussions of populism and Europe's political counterrevolution. At a time of pessimism, Krastev ends in a strangely optimistic way with his paean to the legitimacy that can come from the very act of survival.-Mark Leonard, European Council on Foreign Relations

Ivan Krastev's beautifully lucid After Europe packs an enormous amount of wisdom into a very short space. He helps us to understand the hostility to the European ideal in the UK and across the channel and to think about the challenges facing the EU in the near future.-Raymond Tallis in Times Literary Supplement's Books of the Year

Satisfyingly intelligent on our predicament or predicaments.-Michael Hofmann in Times Literary Supplement's Books of the Year

Krastev is one of Europe's most interesting public intellectuals. In what is essentially a long essay he argues that the refugee crisis threatens to widen the gap between elites and voters in ways that threaten the future of the entire European project.-Gideon Rachman in Financial Times

Written with the author's characteristic verve, this bracing book offers a fresh understanding of the current crisis in Europe. Motivated by apprehension yet tinged with realistic optimism, it powerfully highlights why clashing solidarities, declining compassion, resurgent nationalism, and growing geographic divisions demand creative, perhaps surprising, acts of democratic guardianship.-Ira I. Katznelson, author of Fear Itself: The New Deal and the Origins of Our Time

To read this book is to be in the company of one of the great European minds of today. With his characteristic combination of perceptiveness and sympathy, Ivan Krastev gives us in this learned essay just what we need to understand Europe's crisis-and to contemplate our own.-Timothy Snyder, Yale University

Ivan Krastev is one of the sharpest and most elegant political writers to emerge from eastern Europe in recent years. In this slim volume, which is a treasure chest of striking observations and colorful vignettes, the Bulgarian commentator brings a distinctly East European sense of tragedy to Europe's multiple crises.-Sunday Times

Ivan Krastev is one of Europe's leading thinkers, and After Europe offers a stark warning about the direction in which the continent is heading. Anyone who care about the future of the European project should read it carefully.-Madeleine K. Albright, Former U.S. Secretary of State

Ivan Krastev is one of the most interesting thinkers of our time. A juggler of paradoxes, an assailer of conventional wisdoms-you may not always agree but you will never be bored. At once an antidote to foolish optimism and to resigned pessimism, this fascinating meditation on the collapse of Europe as we know it is classic Krastev.-Robert Kagan

Ivan Krastev is Chair of the Center for Liberal Strategies in Sofia, Bulgaria, and a permanent fellow at the Institute for Human Sciences, Vienna. He is a contributing opinion writer for the International New York Times and author of Democracy Disrupted: The Politics of Global Protest, also available from the University of Pennsylvania Press.
GOR008660768
9780812249439
0812249437
After Europe by Ivan Krastev
Ivan Krastev
Used - Very Good
Hardback
University of Pennsylvania Press
20170605
128
Winner of Winner of the 2017 Central Europe Foundation Elemer Hantos Prize. Winner of Finalist for the European Book Prize, conferred by the European Union. null null null null null null null null
Book picture is for illustrative purposes only, actual binding, cover or edition may vary.
This is a used book - there is no escaping the fact it has been read by someone else and it will show signs of wear and previous use. Overall we expect it to be in very good condition, but if you are not entirely satisfied please get in touch with us
Trustpilot