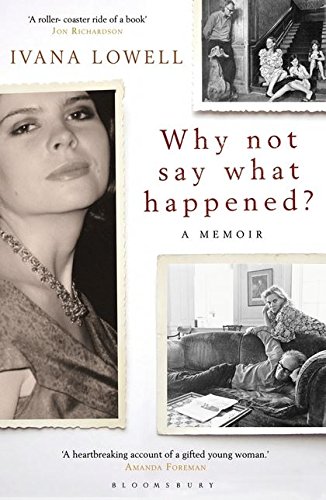 Why Not Say What Happened?
by Ivana Lowell

Why Not Say What Happened? Summary

Why Not Say What Happened?: A Memoir by Ivana Lowell

Beautiful, intelligent and wealthy, Ivana Lowell seemed to have it all. Part of the Guinness dynasty, her family were glamorous and well-connected. Her charismatic but spoilt grandmother Maureen had made an excellent marriage with the Lord of Dufferin and Avon and was a leader of the fashionable set in her youth. Her mother, the writer Caroline Blackwood, socialised with the most glitteringly bohemian and high-profile figures of New York and London. Caroline had intense love affairs and was married to the painter Lucian Freud and the talented composer Israel Citkowitz before finally settling down with the poet Robert Lowell. However, being born into the Guinness inheritance was not the blessing that it appeared to be. Ivana's life of glamour and high-living has been marked by tragedy and loss. Like her brilliant but troubled mother, she has been plagued by an addiction to alcohol which took root when she was still a self-conscious schoolgirl. Having survived a childhood accident which left her physically scarred and the instability of a frenetic home life, she is also faced with the discovery of a secret which threatens to undermine her entire past. This frank and witty memoir is both vibrant and sad. It is laced with anecdotes and familiar names from the 1940s to the present, but it is ultimately an account of the relationship between mother and daughter, the story of two women whose deep affection for each other withstands everything that life has to throw at them.

Customer Reviews - Why Not Say What Happened?

Why Not Say What Happened? Reviews

'A riveting memoir about high society, alcohol and the corrosive effects of wealth' * Sunday Times *
'Impossible to put down ... Never before has so much bad behaviour by people who should have known better been crammed into so few pages' * Rachel Cooke, Observer *
'A painful and yet bravely hilarious memoir' * Evening Standards Books of the Year *
'A candid and anecdote-laden book' * Tatler *

Ivana Lowell was born in New York. Her childhood was spent between England, Ireland and the U.S. She has worked in the worlds of theatre, publishing and film. She currently lives in New York with her daughter. This is her first book.

GOR010736739
Why Not Say What Happened?: A Memoir by Ivana Lowell
Ivana Lowell
Used - Like New
Paperback
Bloomsbury Publishing PLC
2011-09-05
304
1408810042
9781408810040
N/A
Book picture is for illustrative purposes only, actual binding, cover or edition may vary.
The book has been read, but looks new. The book cover has no visible wear, and the dust jacket is included if applicable. No missing or damaged pages, no tears, possible very minimal creasing, no underlining or highlighting of text, and no writing in the margins.