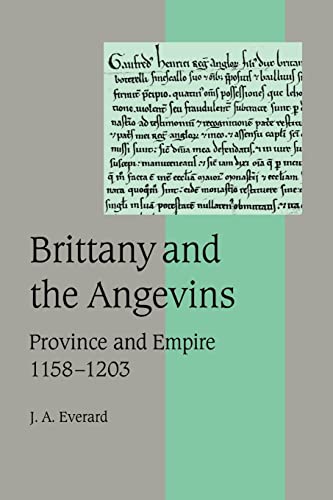 Brittany and the Angevins
by J. A. Everard (Fitzwilliam College, Cambridge)

Out of Stock
$79.99
inc. GST
This book, first published in 2000, is a political history of Brittany between 1158 and 1203, when it was ruled by the Angevin king of England, Henry II, and his successors. The book examines the process whereby Henry II gained sovereignty over Brittany and how it was governed thereafter.
Very Good
Only 0 left

Brittany and the Angevins Summary

Brittany and the Angevins: Province and Empire 1158-1203 by J. A. Everard (Fitzwilliam College, Cambridge)

The rule of the Angevins in Brittany is characterized usually as opening an isolated 'Celtic' society to a wider world and imposing new and alien institutions. This study of Brittany under the Angevins, first published in 2000, demonstrates that the opposite is true: that before the advent of Henry II in 1158, the Bretons were already active participants in Anglo-Norman and French society. Indeed those Bretons with landholdings in England, Normandy and Anjou were already accustomed to Angevin rule. The book examines in detail the means by which Henry II gained sovereignty over Brittany and how it was governed subsequently by the Angevin kings of England from 1158 to 1203. In particular, it examines the extent to which the Angevins ruled Brittany directly, or delegated authority either to native dukes or royal ministers and shows that in this respect the nature of Angevin rule changed and evolved over the period.

Brittany and the Angevins Reviews

'... this is an excellent monograph that displays considerable insight, scholarship and originality and makes an important contribution to English and French history.' History
'With carefully assembled knowledge of a huge cast, she traces in remorseless but clear detail the familial and material motives behind the apparently purposeless wars, rebellions, and shifts of alliance which fill the chronicles of the period, and arrives at many convincing insights.' Cambrian Medieval Celtic Studies
"...carefully researched and cogently argued...[a] fine book..." Bailey K. Young, Eastern Illinois University, The Historian
"A fine piece of research..." Speculum

GOR010257547
Brittany and the Angevins: Province and Empire 1158-1203 by J. A. Everard (Fitzwilliam College, Cambridge)
J. A. Everard (Fitzwilliam College, Cambridge)
Cambridge Studies in Medieval Life and Thought: Fourth Series
Used - Very Good
Paperback
Cambridge University Press
2006-11-02
264
052102692X
9780521026925
N/A
Book picture is for illustrative purposes only, actual binding, cover or edition may vary.
This is a used book - there is no escaping the fact it has been read by someone else and it will show signs of wear and previous use. Overall we expect it to be in very good condition, but if you are not entirely satisfied please get in touch with us.