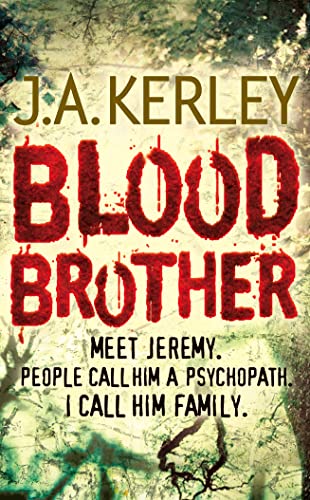 Blood Brother
by J. A. Kerley

These brothers have murder in their veins. Detective Carson Ryder's sworn duty is to track killers down. He's never revealed the fact that his brother, Jeremy, is one of America's most notorious killers - now imprisoned. Secretly, Ryder has used Jeremy's homicidal insight to solve cases. He's made a career out of it. Now his brother's escaped and is at large in New York.

With Jeremy the chief suspect in a series of horrifying mutilation-murders, a mysterious video demands Ryder be brought into help. It looks like a straightforward manhunt. It couldn't be more different - or more terrifying. A dangerous cat-and-mouse game develops between Jeremy and the NYPD, with Ryder in the middle, trying to keep his brother alive and the cops in the dark. But it's a game of life, death and deceit, a game with an unknown number of players and no clear way of winning...

Praise for the Carson Ryder series:

'Kerley will truly scare the pants off his readers. This one's another winner from a writer moving towards the top of the thriller heap' Publishers Weekly

'Kerley, who writes like a house fire, has a boundless and truly ghastly imagination that'll keep you awake long after you turn the last page' Kirkus

'A fascinating and frightening take on the genre' Independent on Sunday

'A chilling journey into a pitch-black mind' Michael Marshall, author of The Straw Men trilogy

'A sturdy hero with a clearcut mission and a setting that holds possibilities for fresh adventure. Kerley writes in a thrusting style that pushes the action from crime scene to autopsy table' New York Times Book Review

About J. A. Kerley

Jack Kerley worked in advertising and teaching before becoming a full-time novelist. He lives in Newport, Kentucky, but also spends a good deal of time in Southern Alabama, the setting for his Carson Ryder series, starting with 'The Hundredth Man'. He is married with two children.

GOR001065207
Blood Brother (Carson Ryder, Book 4) by J. A. Kerley
J. A. Kerley
Carson Ryder
Used - Very Good
Paperback
HarperCollins Publishers
2008-07-01
448
0007269072
9780007269075
N/A
Book picture is for illustrative purposes only, actual binding, cover or edition may vary.
This is a used book - there is no escaping the fact it has been read by someone else and it will show signs of wear and previous use. Overall we expect it to be in very good condition, but if you are not entirely satisfied please get in touch with us.