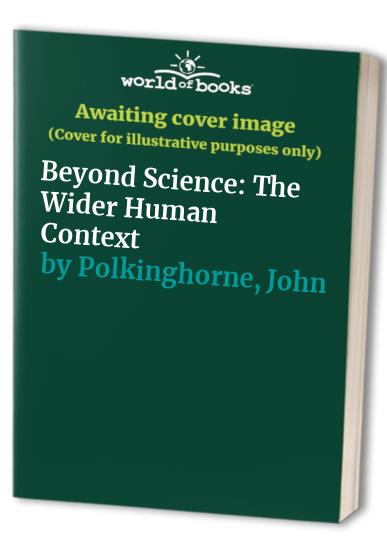 Beyond Science
by J. C. Polkinghorne

In Stock
$12.99
+10% GST
Science is very successful in discovering the structure and history of the physical world, but there is more to be told of the encounter with reality than can be gained from impersonal experience and experimental test. Beyond Science provides a considered and balanced account which firmly asserts science's place in human culture.
Very Good
Only 1 left

Beyond Science: The Wider Human Context by J. C. Polkinghorne

Science is very successful in discovering the structure and history of the physical world, but its success is purchased by the modesty of its ambition. There is more to be told of the encounter with reality, including the nature of scientific inquiry itself, than can be gained from impersonal experience and experimental test. This book goes beyond science to consider the human context in which it operates and to pursue that wider understanding which we all seek. It looks to issues of meaning and value, intrinsic to scientific practice but excluded from science's consideration by its own self-denying ordinance. It raises the question of the significance of the deep mathematical intelligibility of the physical world and its anthropically fruitful history. It considers how we may find responsible ways to use the power that science places in human hands. Science is portrayed as an activity of human persons pursued within a convivial and truth-seeking community. This book neither over-values science (as if it were the only worthwhile source of knowledge) nor devalues it (as if it were to be treated with suspicion or not taken seriously). Beyond Science provides a considered and balanced account which firmly asserts science's place in human culture, maintained in mutually illuminating relationships with other aspects of that culture.

'Polkinghorne has written an interesting, thought-provoking book ... a fascinating account.' Ilya Prigogone, The Times Higher Educatonal Supplement
'Polkinghorne's literate sense of wonder at the magical richness of things shines out on almost every page, whether or not one agrees that it implies a creator.' David Mermin, Nature
'A thoughtful book for the mature upper sixth-former.' Andrew Lintern-Ball, School Science Review
' ... this is an admirable book'. Chris Clarke, Physics World

1. Is science enough?; 2. Understanding the physical world; 3. Working together; 4. Memoirs of the great; 5. What happened to the human mind?; 6. What does it mean?; 7. Ultimate questions; 8. Is, ought and wonder; 9. Responsible behaviour.

GOR001996005
Beyond Science: The Wider Human Context by J. C. Polkinghorne
J. C. Polkinghorne
Used - Very Good
Hardback
Cambridge University Press
1996-08-13
143
0521572126
9780521572125
N/A
Book picture is for illustrative purposes only, actual binding, cover or edition may vary.
This is a used book - there is no escaping the fact it has been read by someone else and it will show signs of wear and previous use. Overall we expect it to be in very good condition, but if you are not entirely satisfied please get in touch with us.