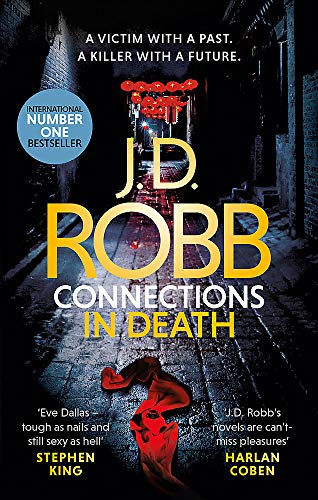 When recovering drug addict Lyle Pickering is found dead of an overdose, it looks like a tragic accident. But his sister Rochelle knows better, and so does Lieutenant Eve Dallas. Lyle was murdered, and the evidence points directly to his old street gang.

As Eve and husband Roarke track the killer through the city's dive bars, drug dens and strip joints, another body is discovered. With connections growing between the living and the dead, and the body count on the rise, Eve knows she needs to close this case fast, before the killer's lust for power turns the city's streets into a bloodbath.

'If you're a crime fiction fan and haven't discovered them yet, welcome to the very best day of your life' - Heat

GOR010320517
Connections in Death: An Eve Dallas thriller (Book 48) by J. D. Robb
J. D. Robb
In Death
Used - Like New
Paperback
Little, Brown Book Group
2019-07-23
448
0349422028
9780349422022
N/A
Book picture is for illustrative purposes only, actual binding, cover or edition may vary.
The book has been read, but looks new. The book cover has no visible wear, and the dust jacket is included if applicable. No missing or damaged pages, no tears, possible very minimal creasing, no underlining or highlighting of text, and no writing in the margins.