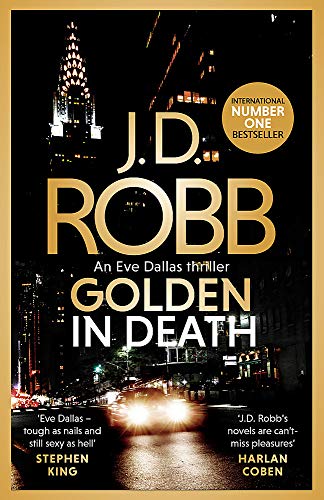 'JD Robb is a fantastic storyteller who knows how to keep the pages flying by' #1 International Bestselling Author, Karin Slaughter

When Kent Abner - baby doctor, model husband and father, good neighbour - is found dead in his town house in the West Village, Detective Eve Dallas and her team have a real mystery on their hands. Who would want to kill such a good man? They know how, where and when he was killed but why did someone want him dead?

Then a second victim is discovered and as Spring arrives in New York City, Eve finds herself in a race against time to track down a serial killer with a motive she can't fathom and a weapon of choice which could wipe out half of Manhattan.

GOR010458472
Golden In Death: An Eve Dallas thriller (Book 50) by J. D. Robb
J. D. Robb
In Death
Used - Like New
Hardback
Little, Brown Book Group
2020-02-06
400
0349422079
9780349422077
N/A
Book picture is for illustrative purposes only, actual binding, cover or edition may vary.
The book has been read, but looks new. The book cover has no visible wear, and the dust jacket is included if applicable. No missing or damaged pages, no tears, possible very minimal creasing, no underlining or highlighting of text, and no writing in the margins.