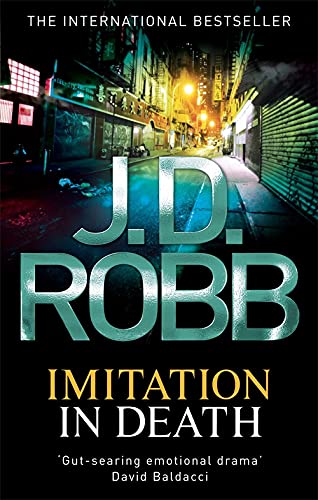 As Lieutenant Eve Dallas stood over what had once been a woman, she wondered when she would see worse than this.

Jack the Ripper, the Boston Strangler, Ted Bundy. The worst murderers in history and a new madman's inspiration. In the lost hours of the night a man in a top hat and swirling cloak leaves horror in his wake and a note to Eve Dallas, signed simply: Jack.

More murders follow and Eve quickly realises the killer's deadly game of imitation. But facing this calm and menacing presence, with a trail running through London, Paris and LA, Eve struggles to keep her focus.

At a time when legend collides with brutal reality, Eve needs all her wits about her . . .

GOR005156729
Imitation In Death by J. D. Robb
J. D. Robb
In Death
Used - Well Read
Paperback
Little, Brown Book Group
2012-04-10
512
0749957379
9780749957377
N/A
Book picture is for illustrative purposes only, actual binding, cover or edition may vary.
This is a used book. We do our best to provide good quality books for you to read, but there is no escaping the fact that it has been owned and read by someone else previously. Therefore it will show signs of wear and may be an ex library book.