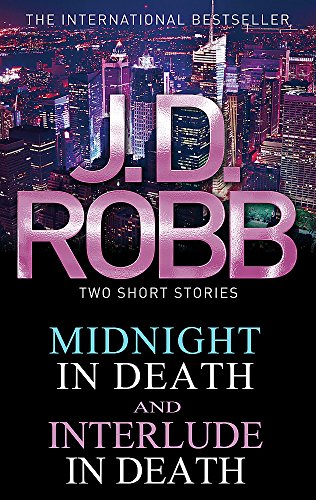 Midnight in Death/Interlude in Death
by J. D. Robb

Midnight in Death/Interlude in Death Summary

Midnight in Death/Interlude in Death by J. D. Robb

Eve's name has made a Christmas list, but it's not for being naughty or nice. It's for putting a serial killer behind bars. Now he's escaped and has her in his sights.

With her husband, Roarke, at her side, Eve must stop this madman from exacting his bloody revenge - or die trying . . .

Set between Holiday in Death and Conspiracy in Death.

When respected Commander Skinner offers Lieutenant Eve Dallas a promotion if she'll give her husband Roarke up to custody, she reacts badly. Roarke's Irish past is murky, but he's a changed man - so what is the Commander after?

With Eve and Skinner at one of Roarke's holiday resorts for a police convention, Skinner's thwarted vengeance soon brings death to their luxury surroundings . . .

Set between Betrayal in Death and Seduction in Death.

Midnight in Death/Interlude in Death Reviews

Whether she writes as J.D. Robb or under her own name, I love Nora Roberts. She is a woman who just doesn't know how to tell a bad story * Stephen King *
J.D. Robb's novels are can't miss pleasures * Harlan Coben *
Anchored by terrific characters, sudden twists that spin the whole narrative on a dime, and a thrills-to-chills ratio that will raise hairs of even the most jaded reader, the J.D. Robb books are the epitome of great popular fiction * Dennis Lehane *
Gut-searing emotional drama * David Baldacci *

With the In Death series, Robb has become one of the biggest thriller writers on earth, with each new novel reaching number one on bestseller charts the world over.

GOR004731144
Midnight in Death/Interlude in Death by J. D. Robb
J. D. Robb
In Death
Used - Very Good
Paperback
Little, Brown Book Group
2013-01-03
336
0749957581
9780749957582
N/A
Book picture is for illustrative purposes only, actual binding, cover or edition may vary.
This is a used book - there is no escaping the fact it has been read by someone else and it will show signs of wear and previous use. Overall we expect it to be in very good condition, but if you are not entirely satisfied please get in touch with us.