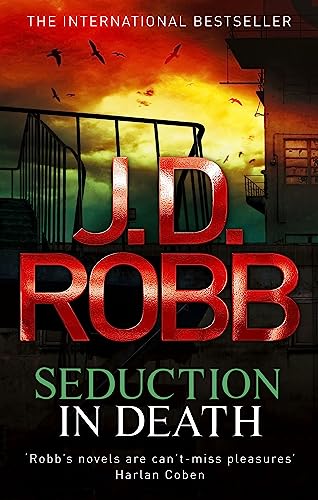 She was twenty-three and already in love. She was certain he'd be handsome. She would be dead before midnight.

Bryna Bankhead carefully dressed for her date with the wonderful Dante, a man she's only ever spoken to online. By the end of the night, rose petals are scattered, poetry has been quoted - and Bryna has been murdered.

What starts as a mistake, becomes a terrifying game, as two young men pursue their poisonous obsession with an illegal drug and an insatiable desire. As more girls are taken, homicide lieutenant Eve Dallas and her roguish husband Roarke must think fast and act even faster.

And then Eve discovers the secret to their destructive past and a deadly trap is set . . .

Gut-searing emotional drama David Baldacci Anchored by terrific characters, sudden twists that spin the whole narrative on a dime, and a thrills-to-chills ratio that will raise hairs of even the most jaded reader, the J.D. Robb books are the epitome of great popular fiction Dennis Lehane J.D. Robb's novels are can't miss pleasures Harlan Coben Whether she writes as J.D. Robb or under her own name, I love Nora Roberts. She is a woman who just doesn't know how to tell a bad story Stephen King This series gets better with every book Publishers Weekly The most popular novelist on planet earth Washington Post A perfect balance of suspense, futuristic police procedural and steamy romance...truly fine entertainment... sure to leave you hungering for more Publishers Weekly Great fun Cosmopolitan

Under the pseudonym J.D. Robb, Nora Roberts published her first Robb novel in 1995. With the In Death series, Robb has become one of the biggest thriller writers on earth, with each new novel reaching number one on bestseller charts the world over.

GOR008019817
Seduction In Death by J. D. Robb
J. D. Robb
In Death
Used - Like New
Paperback
Little, Brown Book Group
2012-01-19
480
0749957298
9780749957292
N/A
Book picture is for illustrative purposes only, actual binding, cover or edition may vary.
The book has been read, but looks new. The book cover has no visible wear, and the dust jacket is included if applicable. No missing or damaged pages, no tears, possible very minimal creasing, no underlining or highlighting of text, and no writing in the margins.