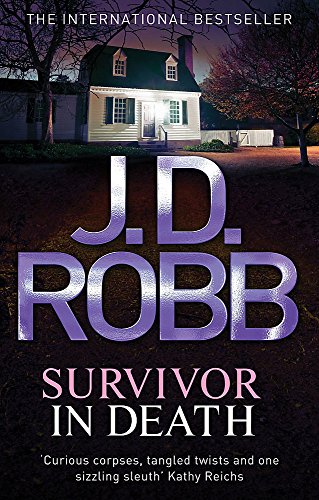 Used Price
$24.49
inc. GST
Free Shipping in Australia
The new and reissued J. D. Robb classic from the 'In Death' series, in which Eve finds a lone survior from a family massacre - only to find herself the new target of an elite set of killers who will stop at nothing . . .
Reviews:
Trustpilot
Like New Very Good Well Read

Murder was always an insult. But the murder, bloody and brutal, of an entire family in their own home, was a different form of evil.

Nixie Swisher crept down the stairs for a drink - and saved her own life. When Lieutenant Eve Dallas is called to the house minutes later, she finds the whole family murdered in their beds. But the killers made a mistake: they left a survivor.

Nixie saw everything. And unfortunately for her, these elite killers soon realise they need to finish the job. So Eve and her billionaire husband Roarke give everything they can to keep Nixie safe in their own home.

And then a terrifying climax reveals there may be more to Nixie than meets the eye . . .

Gut-searing emotional drama * David Baldacci *
Anchored by terrific characters, sudden twists that spin the whole narrative on a dime, and a thrills-to-chills ratio that will raise the hairs of even the most jaded reader, the J.D. Robb books are the epitome of great popular fiction * Dennis Lehane *
J.D. Robb's novels are can't miss pleasures * Harlan Coben *
Whether she writes as J.D. Robb or under her own name, I love Nora Roberts. She is a woman who just doesn't know how to tell a bad story * Stephen King *

GOR008548768
Survivor In Death by J. D. Robb
J. D. Robb
In Death
Used - Like New
Paperback
Little, Brown Book Group
2012-07-19
512
0749957425
9780749957421
N/A
Book picture is for illustrative purposes only, actual binding, cover or edition may vary.
The book has been read, but looks new. The book cover has no visible wear, and the dust jacket is included if applicable. No missing or damaged pages, no tears, possible very minimal creasing, no underlining or highlighting of text, and no writing in the margins.