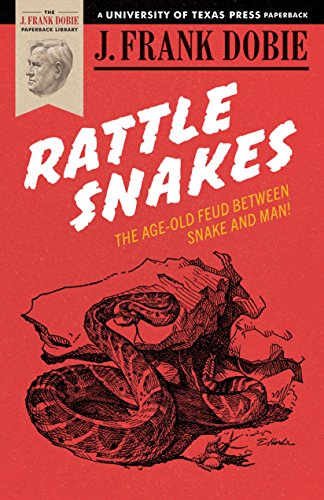 Here are observations and speculations, legends and yarns, even gossip about the habits and dispositions of these extraordinary creatures-rattlesnakes-their reported size, deadliness, and power to charm their natural enemies. Here are descriptions of actual fights to the death between rattlesnakes and other animals and accounts of the strange experiences human beings have had with them, as well as tips on where to find them and how to act when you see one.

Dobie began systematically collecting lore about the rattlesnake world many years ago, using some of it in such regional publications as Southwest Review and incorporating much of it into essays-with the intention of eventually putting together a book about rattlesnakes. Now, in this collection of twenty-two articles, his wish is posthumously fulfilled.

Only Frank Dobie could tell of this fascinating and frightening creature with such wisdom and humor, thereby tempering "the age-old feud between the snake and man." And the rattlesnake-who once aroused fear among even the boldest men in the Old West-can at last be regarded with tolerance, respect, and even affection.

J. Frank Dobie was a folklorist and author of many books about Texas life and culture.
GOR002824699
9780292770232
0292770235
Rattlesnakes by J. Frank Dobie
J. Frank Dobie
The J. Frank Dobie Paperback Library
Used - Very Good
Paperback
University of Texas Press
1981-11-30
207
N/A
Book picture is for illustrative purposes only, actual binding, cover or edition may vary.
This is a used book - there is no escaping the fact it has been read by someone else and it will show signs of wear and previous use. Overall we expect it to be in very good condition, but if you are not entirely satisfied please get in touch with us
Trustpilot