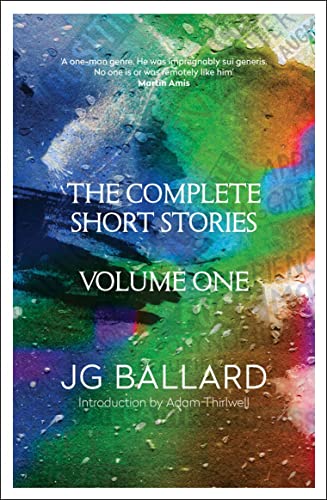 First in a two volume collection of short stories by the acclaimed author of `Empire of the Sun', `Crash' and `Super-Cannes'. The new edition is introduced by Adam Thirwell.

First in a two volume collection of short stories by the acclaimed author of `Empire of the Sun', `Crash' and `Super-Cannes'. The new edition is introduced by Adam Thirwell.

With eighteen novels over four decades - from `The Drowned World' in 1962 to his final novel `Kingdom Come' in 2006 - J.G. Ballard is known as one of Britain's most celebrated and original novelists.

However, during his long career he was also a prolific writer of short stories; in fact, many people consider that he is at his best in the short-story format. These highly influential stories have appeared in magazines such as New Worlds, Amazing Stories and Interzone, and in several separate collections, including `The Terminal Beach', `The Venus Hunters', `Vermilion Sands', `Low-Flying Aircraft' and `Myths of the Near Future'.

Set out in the original order of publication and frequently the point of conception for ideas he further developed in his novels, these stories provide an unprecedented opportunity to see the imagination of one of Britain's greatest writers at work. This edition is part of a new commemorative series of Ballard's works, featuring introductions from a number of his admirers (including Robert Macfarlane, Iain Sinclair, James Lever and Ali Smith) and brand-new cover designs from the artist Stanley Donwood.

`More than one thousand compelling pages from one of the most haunting, cogent and individual imaginations in contemporary literature' William Boyd

`A marvel ... there is something a little shaming in reading Ballard: you have to face the fact that there exist writers with such fresh imaginations they can't write five pages without stumbling on an alternate world' Zadie Smith

`Indispensable ... probably the most original English writer of the last century' China Mieville

GOR001952305
The Complete Short Stories: Volume 1 by J. G. Ballard
J. G. Ballard
Used - Good
Paperback
HarperCollins Publishers
2006-09-04
784
0007242298
9780007242290
N/A
Book picture is for illustrative purposes only, actual binding, cover or edition may vary.
This is a used book - there is no escaping the fact it has been read by someone else and it will show signs of wear and previous use. Overall we expect it to be in very good condition, but if you are not entirely satisfied please get in touch with us.