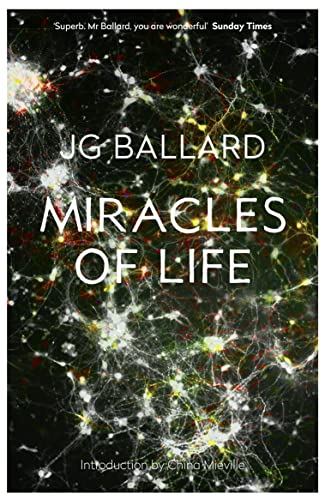 J. G. Ballard was, for over fifty years, one of this country's most significant writers. Beginning with the events that inspired his classic novel, `Empire of the Sun', this revelatory autobiography charts the course of his astonishing life.

J. G. Ballard was, for over fifty years, one of this country's most significant writers. Beginning with the events that inspired his classic novel, `Empire of the Sun', this revelatory autobiography charts the course of his astonishing life.

`Miracles of Life' takes us from the vibrant surroundings of pre-war Shanghai, to the deprivations and unexpected freedoms of Lunghua Camp, to Ballard's arrival in a devastated Britain. Ballard recounts his first attempts at fiction and his part in the social and artistic revolutions of the 60s. He describes his friendships with figures as diverse as Kingsley Amis, Michael Moorcock and Eduardo Paolozzi alongside recollections of his domestic life in Shepperton - raising three children as a single father following the unexpected and premature death of his wife.

`Miracles of Life' is both a captivating narrative of the experiences that have shaped this extraordinary writer's works, his distinctive outlook and his original visions of the future, and is also an account of a remarkable life.

This edition is part of a new commemorative series of Ballard's works, featuring introductions from a number of his admirers (including Ali Smith, Hari Kunzru, Neil Gaiman and Martin Amis) and brand-new cover designs.

`Brief, modest and occasionally shattering, in a way that elevates it to a level of greatness' Observer

`A jewel. As a writer, he can simply take the breath away' Independent

GOR001116690
Miracles of Life by J. G. Ballard
J. G. Ballard
Used - Very Good
Paperback
HarperCollins Publishers
2008-11-01
288
0007272340
9780007272341
Short-listed for Galaxy British Book Awards: Tesco Biography of the Year 2009
Book picture is for illustrative purposes only, actual binding, cover or edition may vary.
This is a used book - there is no escaping the fact it has been read by someone else and it will show signs of wear and previous use. Overall we expect it to be in very good condition, but if you are not entirely satisfied please get in touch with us.